Do You Really Understand Your Risk of Dying From COVID? by Dr. Joseph Mercola

Do you really understand your risk of dying from COVID-19? According to The Hill,1 a poll taken in mid-August 2020 showed “Americans have a significant misunderstanding of the risk of death from COVID-19 when it comes to different age groups.”

On average, Americans were under the impression that people under the age of 44 made up about 30% of deaths, when the actual figure was less than 3%. At the time, 58% of those polled who were between the ages of 18 and 24 also said they feared “significant health consequences” were they to get infected, when in reality this age group accounted for a mere 0.1% of COVID deaths.

Similar stats were found in April 2021, when the Washington Examiner reported on polls showing “COVID-19 alarmism” had resulted in 18- to 24-year-olds being the “most anxious about resuming normal life — despite being by far the least at risk from COVID-19.”2

At the time, the reported death rate among this group was 0.006%, yet half reported being nervous about interacting socially. Meanwhile, in the highest-risk group, those 55 and older, only 31% were nervous about social interactions; 65% were not.

Has anything changed? Anecdotally, it seems mask wearers these days are primarily young (and seemingly healthy) people, while the majority of older individuals have embraced the freedom to breathe freely again.

Based on a new preprint analysis by professor John Ioannidis, there’s really no reason for anyone to live in fear anymore, regardless of your age, as your risk of dying from COVID is — and always was — minuscule across the board.

Ioannidis’ paper,3,4 posted on the preprint server medRxiv October 13, 2022, looked at pre-jab national seroprevalence studies to ascertain the age-stratified infection fatality rate (IFR) of COVID-19 in people between the ages of birth and 69. As noted in the abstract:

“The infection fatality rate (IFR) of COVID-19 among non-elderly people in the absence of vaccination or prior infection is important to estimate accurately, since 94% of the global population is younger than 70 years and 86% is younger than 60 years.

Based on these data, the authors came up with the following median IFRs: 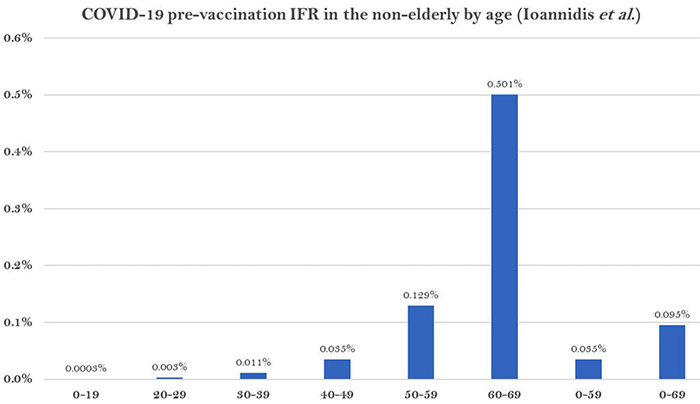 In other words, before the COVID jabs came along, out of 10,000 infected people under the age of 59, three died. Looking at the full age spread — birth to 69 — 7 in 10,000 infected individuals died. According to the authors:6

“At a global level, pre-vaccination IFR may have been as low as 0.03% and 0.07% for 0-59 and 0-69 year old people, respectively. These IFR estimates in non-elderly populations are lower than previous calculations had suggested … Large differences did exist between countries and may reflect differences in comorbidities and other factors.”

The graph below illustrates the ranging IFRs across populations in different countries.

As reported by the Daily Skeptic,7 “The significantly higher values for the top seven [countries] suggest some of the difference may be an artifact of, for example, the way COVID-19 deaths are counted, particularly where excess death levels are similar …”

Wide variations in IFR between countries for the same age groups were also found, which they postulate may be due to:8,9

Presenting this same data as COVID survival rates in the pre-jab era (i.e. 2020, before the rollout of the COVID shots) instead of fatality rates, you get the following:

Now, these numbers were all prior to the COVID jabs. Emerging evidence suggests the shots are causing immune deficiency in some people, thereby actually raising their risk of dying from SARS-CoV-2 infection, even with the now milder strains.