If you haven’t seen 2000 Mules it’s more than 90 minutes of video evidence that mimics what you see in the video below.

And what’s this? @KariLake https://t.co/lG3MiahSdW

Third world countries have more secure elections than the USA.

How much longer will we allow ballot harvesting, mail-in ballots and 2-3-4 weeks of “early” voting? We need to go to 100% one day voting, voter ID and rarely acceptable mail-in ballots. If we don’t this type of rigged, fraudulent activity our nation will continue to be the laughing stock of the world. The laughter began in 2020 when, then V.P. Mike Pence certified Biden with having picked up 81 Million votes while only winning fewer than 400 counties across the country.

I am no mathematician, so correct me if I’m incorrect…
The average population per county is 104,000.
Based on the totals in the election the counties won by: President Trump population 29,700+, Biden 162,600+, former President Obama 83,000+.
This is statistically impossible. pic.twitter.com/F9ECT2rRhb

As we have stated before –

To listen to the media one would think this nation is made up of liberal/progressive/communist flying a democrat flag. One would be sadly mistaken. The chart was produced a few days before the final count  of the midterm 2022 elections.

Three states, with a possible fourth, that could be 100% liberal/progressive/communist flying a democrat flag.

Read: Forgiveness, Amends, Amnesty – What About An International Tribunal?

Even if we throw in Maine 1.369 million we barely breach the 10 million mark – you know, about a million more people than New York City, with 8.9 million. Even if, which they won’t, even if the areas remaining to be “counted” turn blue you would still walk away, with the exception of Vermont, New Hampshire and Massachusetts with blue areas/cities.

Shows how “secure” US elections are. pic.twitter.com/DPacYl0uHV

One last piece of important information to consider… 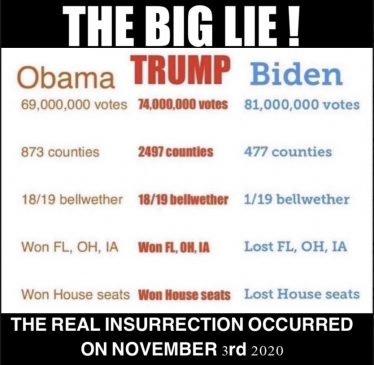 Until we get rid of the democrat owned voting machines, democrats will continue to be in charge of everything. We can already see a massive crack in their stronghold with Elon Musk taking control of Twitter. Yes, Facebook, Google, Duck Duck Go and Amazon are still operated as the tech-arm of the communist/democrat party, but Twitter is different. Twitter is where bloggers, actual journalist and other thought leaders share information, have conversations regarding news items and events that impact our lives. The communist/democrats, through entities like MSNBC, CNN, New York Times, Washington Post and a wide variety of other media outlets, have used Twitter as an amplifier for the days talking points coming out of Washington DC or coming from the puppet masters of Washington DC when President Trump was in office. So, Twitter is an extremely important piece of the puzzle. Without the 100% cooperation of blue-haired liberal communist quieting the voices of all the conservative journalist and citizen journalist the narratives, the talking points will be much, much harder to spread as quickly without someone “fact-checking” their nonsense. Look at how quickly CBS was able to “verify” the Hunter Biden laptop now that Twitter is no longer able to suppress the lies, propaganda and other untruths about the treason committed by Joe Biden and the Biden Crime Family.

We have an opportunity to take back our country, but that time, I fear, is drawing short. We may have actually passed the tipping point and have entered a very dark place, a place there is no coming back from nor recovering the glory and grandeur that was once the hallmark of this nation. We have become the laughing stock of the world. We are no longer respected on the world stage and are seen as nothing more than a land of milk and honey to be harvested by the tyrant who has the ear of Washington DC. We have been sold down a bill of goods that are rotten to the core. The stench of that rot is now wafting through the air. The sad part is most people have turned a blind eye and deaf ear and no longer have any sense of smell.