If Nazi Germany would have filmed Adolf Hitler in color the scene would have looked exactly like Biden in Philadelphia on Sept. 1, 2022. When Biden and Mrs. Biden came to the podium I turned to my wife and said “It looks like a demon arising from his lair.”

The white Light left the frame of the camera and was replaced with a blood red / black glow that sucked any light out of the place. There was black filling in the places where light should have been and this ominous feeling came over the whole scene. Then, Biden began speaking. 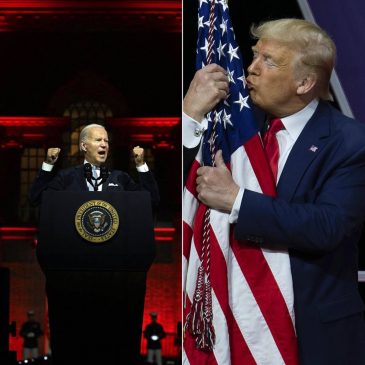 Which one would you choose? pic.twitter.com/PBWwkciXw4

In the image above the man on the right has been called a nazi, a traitor, an insurrectionist, a communist, fascist, semi-fascist and a host of other derogatory names. The man on the left has been called a uniter, Commander, brave and a host of other uplifting names. If a person were to see this image, and not have any prior knowledge of the two men, the person viewing the image would probably say the “labels” are completely, 100% backwards. That person would be absolutely 100% correct. 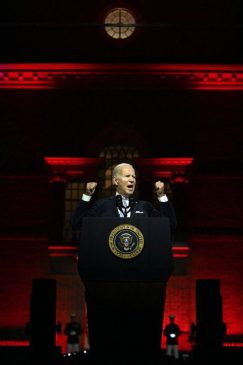 The above image is the the full blown version so one can get a sense of evil emanating from this whole scene. It is terrifying to think this man is in charge of our country. This image will go down in history as the defining moment of our generation. The only question at this point is what are we, the people, going to do about it? Are we going to continue to sit idly by as this, obvious, demon, communist destroys the remains of our once proud nation or are we going to rise up and take our country back?

The next time you hear Biden accusing the MAGA crowd,
Just think of this video & remember the left used our freedom of the press to push non stop lies propaganda & yellow journalism about Trump to intentionally manipulate the left & incite hate & division pic.twitter.com/NylOIocDtr

Supporters of the current occupant of the White House say the patriots are evil and then tell us to unite. Supporters say don’t exercise you’re God given right to free speech. When these people say these types of things they sound like we should be servants to a uni-party, the democrat party, the communist state.

Even the thumbnail of the video from a state sponsored media outlet can’t hide the absolute evil that envelopes this speech.