W.H.O. – 99% of Monkeypox Cases are Among Men, 95% Men who Have Sex with Men – Calls for Global Censorship of MonkeyPox “Misinformation” by Brian Shilhavy, Editor, Health Impact News

The World Health Organization published recommendations regarding the MonkeyPox “Global Emergency” today, and in doing so, they revealed that this “virus” actually only risks a very small portion of the world’s population: men having sex with other men.

The World Health Organization on Wednesday recommended that gay and bisexual men cut back on the number of sexual partners to reduce the spread of monkeypox, after the WHO’s monkeypox expert, Rosamund Lewis, noted that men who have sex with men are the group with the highest risk of infection right now, CNBC reports.

Around 99% of cases are among men, while 95% of those are men who have sex with men, Lewis added.

“For men who have sex with men, this includes for the moment, reducing your number of sexual partners, reconsidering considering sex with new partners, and exchanging contact details with any new partners to enable follow up if needed,” said WHO chief Tedros Adhanom Ghebreyesus, who added that it’s critical for public health authorities to communicate to the gay community in order to reduce the transmission of the virus.

Monkeypox is primarily spread through skin-to-skin contact during sex. According to the WHO’s Lewis, the virus will have an opportunity to continue spreading if people don’t limit the number of sex partners and anonymous sexual contact.

“The critical piece is really focusing in on close, intimate personal contact, prolonged contact that happens during sex as the key mode of transmission,” said Andy Seale, an advisor to the WHO who specializes in STIs. 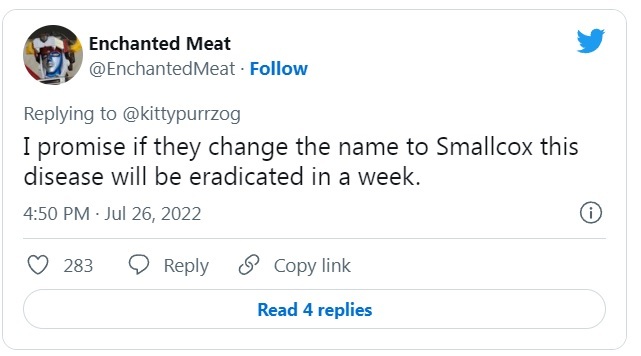 WHO Director-general Tedros Adhanom then called for global censorship on any “disinformation” that does not follow the WHO approved propaganda, just as they did with COVID-19.

NOW – Tedros calls on all social media platforms to work with the WHO to counter #monkeypox “disinformation.” pic.twitter.com/a6O3fRRpbp

So there you have it. Don’t let history repeat itself, because we know now that those who researched the truth for themselves regarding COVID-19 (labeled as “misinformation”) and determined that it was not a major risk, and therefore stayed clear from the “vaccines” and other novel, new medicines that were quickly authorized for “emergency use,” are the ones who are still alive today and still have their hearts and brains in tact.