Trump Tweets “All Is Well”: At Least Nine Rockets Strike American Air Base In Iraq from Zero Hedge

Rabobank’s Michael Every has an early hot-take on the situation:

At this stage, with news hazy and facts on the ground absent, there appear two realistic scenarios.

One is that this attack is theatre to placate the large crowds who were so recently on Iran’s streets.

The alternative is that Iran has genuinely decided to test Trump by also upping the ante.

The only way to tell is if there are US casualties.

If we get images of dead and injured US soldiers, then the worst-case scenarios begin to open up. If no real damage has been done by these missiles, but Tehran gets to show the crowds it responded, then more positive possibilities are still available. We will find out shortly – but breaking news is that there are ‘only’ Iraqi casualties, according to its Ministry of Defence. It remains to be seen if that is a red line for Trump, or is the kind of collateral damage he was expecting after taking out former IRGC head Soleimani.

Given that this move from Iran appears totally out of keeping with their usual strategic acumen, either the loss of Soleimani has meant a total loss of talent, and/or self-control, or this is indeed a token level of revenge.

I will *cautiously* stick to that interpretation for now.

All is well! Missiles launched from Iran at two military bases located in Iraq. Assessment of casualties & damages taking place now. So far, so good! We have the most powerful and well equipped military anywhere in the world, by far! I will be making a statement tomorrow morning. 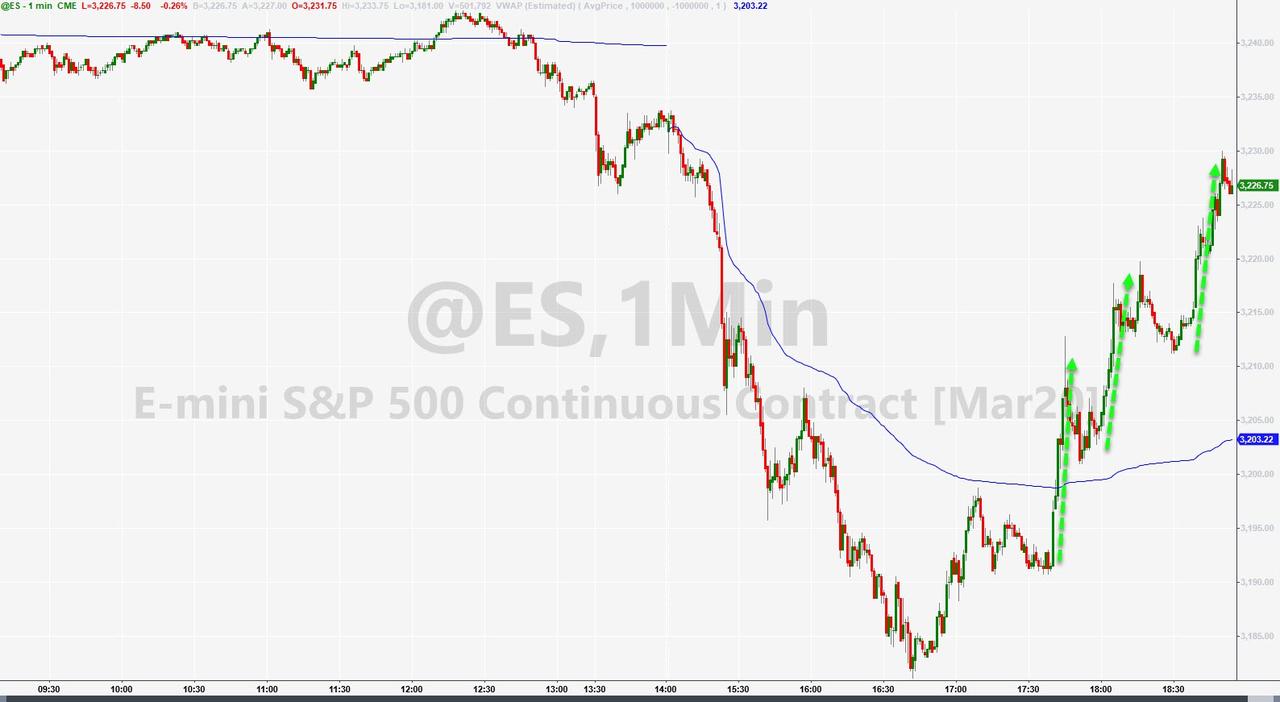 Update 15: Between President Trump’s silence (no planned address to the nation) and reports that Iran has told the UN Security Council that “it does not seek war,” futures markets have pared losses…

Update 14: According to NBC’s Ali Arouzi, Iran has said that if there is no retaliation from America for these latest attacks then they will stop attacking. But if America attacks then their response “will be crushing and wide spread.”

Iran is saying that if there is no retaliation from America for these latest attacks then they will stop attacking. But if America attacks then their response will be crushing and wide spread. #iran #soleimani #war

Update 13: The FAA has banned all civilian flights over Iran, Iraq, the Persian Gulf, and the Gulf of Oman “due to heightened military activities” and the “potential for miscalculation or misidentification” according to AP. 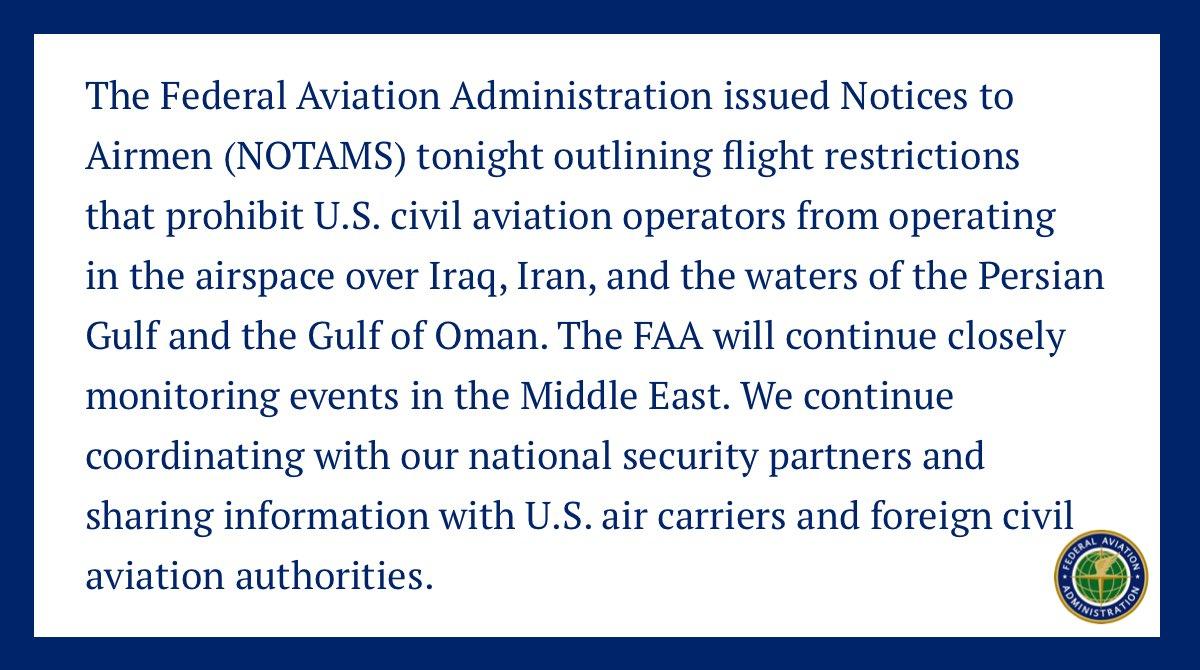 * * *
Update 12: Iran has warned that if there is retaliation for the two waves of attacks they launched their 3rd wave will destroy Dubai and Haifa.

Iran is warning that if there is retaliation for the two waves of attacks they launched their 3rd wave will destroy Dubai and Haifa.#iran #Soleimani #war

Update 11: According to CNN, the White House is making plans for Trump to address the nation from the Oval Office tonight, although according to the NYT this won’t happen:

Meanwhile, according to Iran’s Mehr news agency and other sources, if still unconfirmed officially, the Iranian air-force has been has been deployed.

Separately, social media sources report that according to the Pentagon, the Iranian missile attack resulted in casualties among Iraqis only.

Update 10: Amid reports from VoA that a total of 3 US locations have been hit in Iraq by Iran cruise missiles – Al Asad, Erbil and Taji – we now wait for the US counter-response: just after 730pm, US Defense Secretary Mark Esper and Secretary of State Mike Pompeo arrived at the White House, as did the Chairman of Joint Chiefs. In short, Trump’s entire war cabinet is now at the White House.

And here is the clearest footage yet of the Iran ballistic missile launch against US targets in Iraq:

Clearest footage from Iran showing the moment when IRGC launched the missiles against the US targets in Iraq pic.twitter.com/S1nXkOvMD6

Update 9: According to Iran’s semi-official news agency Tasnim, a “second wave” of attacks targeting an unidentified US base in Iraq. Meanwhile, the Iran Revolutionary Guard Corps, or IRGC, has issued a statement urging U.S. people to call back American soldiers from the region. The IRGC statement adds that more details of the missile attack will be published later.

Update 8: The Pentagon has released a full statement on the attacks, claiming that more than a dozen missiles were fired from within Iran, and that at least two Iraqi military bases hosting US troops were targeted.

We are working on initial battle damage assessments.

In recent days and in response to Iranian threats and actions, the Department of Defense has taken all appropriate measures to safeguard our personnel and partners. These bases have been on high alert due to indications that the Iranian regime planned to attack our forces and interests in the region.

As we evaluate the situation and our response, we will take all necessary measures to protect and defend U.S. personnel, partners, and allies in the region.

Due to the dynamic nature of the situation, we will continue to provide updates as they become available.

Meanwhile, more footage of the attacks has appeared on social media:

US jets are reportedly “in the air” and leaving Turkey as stocks extend their decline, and oil futures continue to climb. Reports are claiming that shelling has stopped at Al Asad Air Base, and that roughly 35 rounds hit the base.

Some media reports noted that the base has been visited by President Trump in the past, giving the attack a special significance. US military sources are saying that troops at the base are still in lockdown, though the attack is said to be over.

Iranian TV is already threatening “more violent responses” if the US retaliates for these latest attacks.

Brent futures have extended their gains to 3% on the news, which seems to suggest that the crisis between the US and Iran over the killing of Suleimani is far from over.

While details on casualties are still unclear, experts are saying that the weapons used were either cruise missiles, or short-range ballistic weaponry, or possibly a mix.

From senior US military source in Iraq:
“Under missile attack from Iran. These are either cruise missiles or short range ballistic missiles. All over the country.”

Update 5: Bloomberg has now confirmed WaPo’s reporting, adding that at least nine rockets have now hit Al-Asad Airbase. There have also been reports of IRGC commanders claiming to have launched “tens of missiles” at the base.

After hours of vague and unconvincing reports about a string of attacks on US buildings in Iraq, the Washington Post has apparently confirmed that at least one of the attacks – the most recent to be reported – is real.

BREAKING VIDEO: Suspected Iranian originating rockets seen being launched toward military base housing US forces in Iraq moments ago. pic.twitter.com/qxnBlV0Kgx

So it looks like this really is the Iranian retaliation that we’ve been waiting for.

Update 3: And the stream of strange reports of attacks and sirens at US bases and consulates around the Middle East continues, as a reporter for Al-Monitor, a credible English-language source of news and analysis on the Middle East region, claims another missile attack has been reported, this time at Al-Asad airbase in Anbar Province.

Reports claim that more than 30 missiles have been launched at the base, and still more are coming in.

NEW: Defense official tells me that Al-Asad airbase that houses US & coalition troops in Iraq has been hit with 6 rockets. Not clear if there are any casualties.

Following reports of a siren heard at the US consulate in Erbil, Iraqi TV is reporting that flights into the local airport have been suspended.

Once again, Iranian media is reporting the attacks, though we must admit, the photo below doesn’t exactly look genuine.

The mainstream American press and Pentagon are still eerily quiet.

Update 2: The UK tabloid Daily Mail is now reporting at “siren test” at Taji military base in Iraq, which it says is host to British and American troops. The report appears to have verified claims that at least five rockets have hit the base, and that sirens have been heard ringing out at consulates around the area, including Erbil, which we noted below.

Critically, the paper notes that some reports suggest that the missile strike might simply be a drill. It also noted that the alleged strike is unfolding just hours after a flurry of US airstrikes on militia bases in Western Iraq and Syria, targeting the Iran-backed Popular Mobilization Units.

One local journalist reports that his sources say the “attack” was merely just a drill, and that the base is “calm tonight.”

The mainstream American press and Pentagon are still eerily quiet.

According to my sources, #Taji camp is calm tonight and no attacks occurred. I will keep you updated.

More unconfirmed reports are trickling in, this time from Australia-based cleric Imam Tawhidi.

#BREAKING: US air defence put on high alert, anticipating a bigger attack by Iran or their militias in Iraq. 5 rockets fired on Camp #Taji, Iraq, minutes ago. pic.twitter.com/hwdBSlIwLd