The CIA Plan to Split the Church in Ukraine Has Failed, Undone by Greed and Ambition by Israel Shamir for Russia-Today

The attempts to remove the church from politics into a hobby corner had failed, but the most important organisation in human history still didn’t regain the place it had before the Jews and liberals joined the forces against Christendom. The defeat of UkroNazis is the first result of the developments.

The Russian President Vladimir Putin is a churchgoer, a rare bird among leading statesmen. He goes to communion; he has a confessor; he lights candles in some small parish church at feasts, he confers with wise old men in remote monasteries. He follows church politics and keeps engaged. Recently, at the unspecified emergency, after the Russian nuclear submersible had suffered a fatal accident (on July, 1), when VP Pence had been recalled to Washington (on July, 2), Putin went to visit the Pope Francis (on July, 4) and had spent a long time with him in a dramatic tête-à-tête. 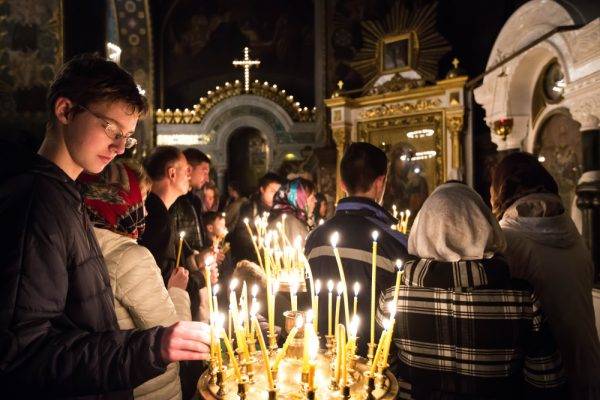 Nothing signifies the change of Russian heart more. In 1944, Joseph Stalin famously retorted Churchill’s nudge to consider the views of the Vatican with “How many divisions does the Pope of Rome have?” Now Stalin’s heir respects and considers the opinions of St Peter’s successor while keeping his own Christian Orthodox faith.

Meanwhile, the once-Christian US had turned away from the Church. If a major US newspaper ever refers to the church, it is usually to condemn it for refusal to consecrate the same-sex union, for ‘paedophile priests’ or for failing Jews at the Holocaust. The US makes a point of never defending Christians. Jews, always; Muslims, sometimes; Christians, never.

The Church was slow to respond, but the much-delayed moment arrived. As long as Moscow had been Red and atheist, the Church had no choice but to stick with Washington. Now it makes no sense.

Putin’s meeting with the Pope, his third audience with Pope Francis and the sixth with a supreme pontiff, signified a cardinal change, I was told by Fr. Jeffrey Langan, a priest of Opus Dei, a man close to the Vatican and a philosophy teacher at the Harvard University. The meeting with Putin marks the decision of the Holy See to windup favouring the United States in the global context. The Vatican had sided with Washington for many years, but now Pope Francis apparently decided that enough is enough. The church should stay neutral in international conflicts. In particular it refers to the Ukraine. The Holy See considers the Ukrainian conflict as a proxy war instigated by the CIA, and it wants to stay out of it.

This is a very important decision. The Ukrainians are predominantly Orthodox Christians, but there is a Ukrainian Greek Catholic Church, a Catholic church of Byzantine rite. It is strong in the Western Ukraine, the fervently nationalist region with its own traditions. The Western Ukrainians (or Galicians) were predominantly peasant folk, but they moved into cities when the Jews and the Poles were killed or expelled. They had little love for Jews and Poles, their neighbours; after their incorporation in the Soviet Ukraine in 1940 they discovered they dislike the Russians (and the Russified Ukrainians) even more.