What the Soviets Intended for Siberia, God Intended for Good by Sarah Eekhoff Zylstra  for The Gospel Coalition

Peter Bakhmutsky wasn’t being overly dramatic. In 1945, the pastor had been exiled to the labor camps in Siberia, shoved from one mine to another. Peter’s son—Yevgeny’s father—had married a girl whose father was also an exiled pastor and whose grandfather had been killed for his faith.

“In our family, at age 5, you started to memorize Scripture completely, with all your heart,” Bakhmutsky said. “Because you’ll probably be in prison one day, and it’s better to have the Bible with you.”

The 20th century was hard on Christians in Russia. Under Vladimir Lenin, and then Joseph Stalin, and then Nikita Khrushchev, and then Leonid Brezhnev, Christians were beaten, imprisoned, and killed in an attempt to eliminate all organized religion. And it almost worked. Under the Soviets, the number of Russian evangelicals dropped to 25 percent of its pre-1917 size, according to the Center for the Study of Global Christianity (CSGC). 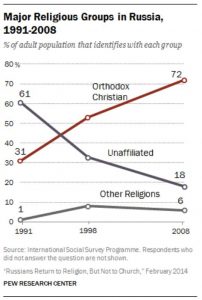 And then, in an early-’90s tumble of countries declaring independence and the Berlin Wall hitting the pavement, the Soviet Union was gone. As the Russian Federation sorted itself out, religious repression eased. From 1991 to 2008, the number of religiously unaffiliated plummetedfrom 61 percent to 18 percent, while those willing to say they were Russian Orthodox shot up from 31 percent to 72 percent (and has stayed there.)

As percentages go, that’s really small. Even smaller is the number of evangelicals—today about 1.2 million, or less than 1 percent, according to CSGC.