As The Clock Quickly Ticks Down Towards Deagel’s 2025 Forecast Of Less Than 100 Million People In America, A Catastrophic Die-Off Of Over 225 Million, The Globalists Try To Hide Their Genocide

While we’ll never get this news from the evening news nor the mainstream media, according to research being done by Edward Dowd, a former expert Wall Street analyst and BlackRock portfolio manager, there is a staggering amount of ‘excess mortality‘ as 2022 nears its close, with over 2,400 EXCESS Americans DYING each day following the rollout of vaccine mandates.

With Dowd warning Mike Adams in this story that comes out to an alarming 900,000 EXCESS Americans dying in a year, as Dowd explains, excess mortality is running about 32%. Around 7,700 Americans routinely die each day, and 32% of that comes to 2,400+ deaths per day. That’s only counting America. Global deaths are, of course, far higher. Credible estimates of global deaths from covid-19 vaccines have been compiled by other analysts and experts, and they claim that at least 20 million people have already been killed worldwide from covid-19 vaccines, making the scale of this “vaccine holocaust” more than triple the size of the historical Holocaust atrocity.

And while quite ludicrously, according to one medical journal, anti-vaxxers are causing the deadly blood clots in vaxxed people by scaring them about all of the now-proven vaccine dangers, if that’s actually the case, then why didn’t all of the medical tyrants scare all of the ‘anti-vaxxers‘ into deadly heart attacks and strokes with their endless medical tyranny, lockdowns, mask mandates and abuse?

With all of these ‘excess deaths‘ happening now at a time when we’ve argued ‘genocide‘ is being carried out by the globalists upon those they see as ‘useless eaters,’ take close note that this is also happening at a time when bioweapons expert Dr. Francis Boyle warns the American people should be going into a major RED ALERT with a new World Health Organization pandemic treaty being finalized, a treaty that would overrule the US Constitution and unleash a medical dictatorship here in America according to Dr. Boyle.

Warning us that if signed into law by Fuhrer Biden, future pandemics would unleash the kind of ‘medical boot stomping upon human faces dictatorship‘ we’re now witnessing in China at the mere mention of a pandemic, as Brian Wilson had elaborated upon in this ANP story, these global eugenicists truly believe they are at war with the rest of us, with our ‘elimination‘ their ‘end game,‘ thus making the words of warning of Greek tragedian Aeschylus hit that much closer to home.: “In war, truth is the first casualty.” 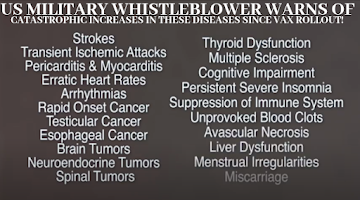 While the shocking list of illnesses and diseases seen above might seem like an outtake from a science fiction disaster movie, it is quite alarmingly a list of illnesses and diseases that US military members are now seeing catastrophic increases of since the rollout of the vaxxes if we are to believe US military whistleblower Lt. Col. Dr. Theresa Long as heard in the 1st video at the bottom of this story, ‘Died Suddenly‘.

Testifying in Idaho back in September and warning us that United States military readiness has been put in jeopardy by the rollout of the vax and the govt forcing US military members to get it, as we all know by now, the vax sure isn’t stopping people from getting COVID and evidence is showing now that the more boosters one gets, the more likely they’ll also be getting COVID at some point in the future.