Something’s About To Break As Mid-Terms Approach And Americans Grow Increasingly Angry At The NWO, The CFR And Their Overlords! By Alan Barton – All News PipeLine 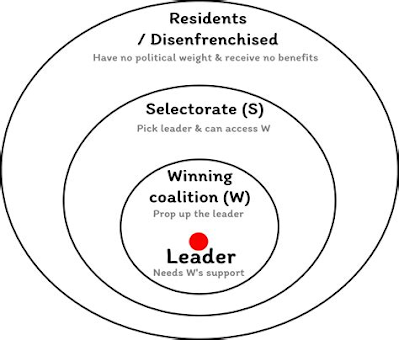 Dictionary-dot-Com says a Selectorate is a “body of people responsible for making a selection, esp members of a political party who select candidates for an election”. The Brits have a slightly different view when they said in the Cambridge dictionary that it means “a group of politicians from a particular political party who elect someone to a political position, rather than a larger group of voters”. We will go along with the first definition, the American one, rather than the Brits because it is too limiting as it is not really the politicians that select our leaders but a much more powerful group that we will get into later. So basically we can say it means a body of people that are responsible for making a selection of just who will be candidates for an election, with most definitions adding that it is by members of a particular political party. We will expand on that definition with some frightening and evil overtones.

A fascinating short overview of the theory of a Selectorate is given in the web page by Rules for Power where their diagram is a bit different than the one given at the top of this column (and includes a couple side graphs showing the relationship with Dictatorships and Democracy) that show how it is arranged in many nations that put together a coalition government as is often seen in the European nations along with other non-communist dictator style governments around the world. 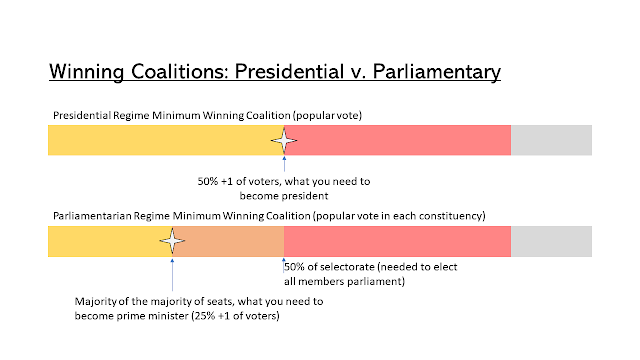 The above graph shows the difference between a “Presidential Regime” and a Parliamentarian Regime but please note that the USA is NOT a Presidential Regime because of the Electoral College. It may appear as one because of the insane appearance of the lowest primary elections idiots somehow magically appearing as the winning team to take over the reins of power in this nation. In order to understand a bit better, realize that it is a fairly new theory and as Wikipedia states, “Originally proposed in 1993 as a part of a work titled The Logic of Political Survival, …. discusses the selectorate theory of politics. Their theory was refined into a 2011 publication titled The Dictator’s Handbook. The main thesis of the book is the implications of selectorate theory and how to improve world and national politics based on its principles.”

Let’s be sure we understand the direction this theory assumes and repeat a couple ideas from the above; “2011 publication titled The Dictator’s Handbook…. how to improve world and national politics”. So it appears the theory covers how to create or institute a dictatorship rather than a popular election system of open government regulated by The People. As the Wiki article continues they bring up an interesting thought when they state that the “theory is based on a single idea: No political leader has ever had total control of their government. Leaders need the support of at least some people to lead, because those people either do something for the leader or tell other people what to do. This means that there is a group of people the leader needs to persuade in order to obtain or keep power. These people are the Selectorate”. So a Selectorate power structure is different than an Autocracy or Imperial power structure because that power is NOT in the hands of a single individual but a coalition of powerful people.

I bring this up because with our 2022 elections less than three weeks away I believe it is instructional to understand just how our candidates, most especially our Presidential candidates, are selected (and not ‘elected’) in reality and not in the Civics theories we were taught in school. True, we are not voting for a President this time, but the lingering effects of this election will definitely be felt when we do in 2024.