BARGE-POCALYPSE unfolding as rivers DRY UP, leaving farmers and coal producers with no transportation by: Mike Adams for Food Science

Just when you thought it was safe to go back in the water, now there’s a “barge-pocalypse” unfolding that you might find rather disturbing. This is a problem with massive global implications that very few people saw coming because barges don’t exactly attract a lot of attention. But they are critical for efficient transportation of crops and coal, and when the barges stop running, the world is in serious trouble.

As FreightWaves.com explains, barges are far more important to the world economy than you might imagine:

In other words, barges are by far the most fuel-efficient and cost effective way to move goods. This is why, of course, many of the world’s largest cities are located on rivers. It’s all about trade and transportation.

But when geoengineering is being actively pursued (see White House geoengineering programs, below) to weaponize the weather and cause droughts, the rivers run dry and barges run aground. This turns the river into a giant logjam of stuck barges, and that’s exactly what’s beginning to happen with the Mississippi River.

Low water levels and dredging shuttered barge traffic heading north and south on the Mississippi last week. At one point, more than 100 towboats and 2,000 barges were stuck waiting… Traffic is limited to one way, according to Petty Officer Jose Hernandez of the U.S. Coast Guard.

That’s like turning a major interstate into a single lane construction zone where vehicles have to take turns using the only available lane. Naturally, traffic backs up for miles.

Coal can’t be transported and farm crops are sitting on the banks of the rivers, growing mold and fungi

Because the barges can barely function along the Mississippi, coal isn’t getting transported in the volumes necessary to meet coal export demand and supply coal to European countries that are facing a freezing winter without energy.

As a result, Poland has just waived air quality restrictions, allowing all Poland residents to literally burn trash in their home stoves to stay warm through the coming winter. (Which gives a whole new meaning to the derogatory term “Eurotrash.”) As Great Game India reports:

Poland has temporarily waived air quality regulations so that residents can burn coal for home heating till next April… some people are also burning trash to remain warm.

Paulina Mroczkowska, a Polish citizen, told Bloomberg that as the NatGas scarcity intensifies and the cost of life skyrockets, she has already seen people using garbage to warm their homes.

“It’s so bad this season that you can smell trash burning every day, which is completely new. Rarely can you smell a regular fuel. It’s scary to think what happens when it really gets cold,” Mroczkowska said, a resident of Warsaw, the capital city.

“In Poland, some households are hoarding garbage to replace their coal,” adds Bloomberg News.

That’s a new one. I know people who gather up huge supplies of gold, silver, ammunition, medical supplies and so on. But even the most aggressive preppers in the USA aren’t hoarding trash. That appears to be a “green European” thing.

Hills of beans now piling up along the Mississippi

The lack of barge transportation is also causing US farmers to dump literal hills of beans on the banks of the Mississippi, awaiting barge availability to complete the transport. Here’s a video of one of these “bean hills” in Memphis:

As beans and other crops sit outside, they begin to grow aflatoxins – extremely toxic, liver-damaging chemicals produced by agricultural molds. Aflatoxins are the No. 1 killer of livestock in America, and they can cause liver damage and even death in humans, too.

The longer the crops sit out in the open, the more aflatoxins they grow. (Note: The Health Ranger Store already tests all our nuts and seeds for aflatoxins, and we are expanding aflatoxin testing to all grains that we sell.)

This means that for each day the barges don’t run, more crops are being ruined.

It’s engineered famine, of course. All by design. Keep reading to understand why and how…

By the way, if you thought food inflation was already bad — vegetable prices are now up 40% year over year — hold my beer. What’s coming in 2023 will make 2022 look like a discount sale. (See Famine.news for daily updates.)

The White House confirms geoengineering efforts are now under way, funded by Congress for 2022

For those readers who don’t yet realize that geoengineering / weather control is a modern reality, you’re way behind the curve. Geoengineering technologies were funded by the US Congress for the 2022 budget, as CNBC.com reports. Those efforts cover weather control and “global dimming” technologies that were derided as conspiracy theories just a few years ago. Now they’re being covered by CNBC.

In a CNBC article that was originally titled, “What is solar geoengineering – Sunlight reflection risks and benefits” but was stealth edited to remove the word “geoengineering,” CNBC explains that the White House Office of Science and Technology Policy is, “coordinating a five-year research plan to study ways of modifying the amount of sunlight that reaches the Earth in order to temporarily temper the effects of global warming.”

Here’s the early headline from the CNBC article which held the HTML title, “What is solar geoengineering?” 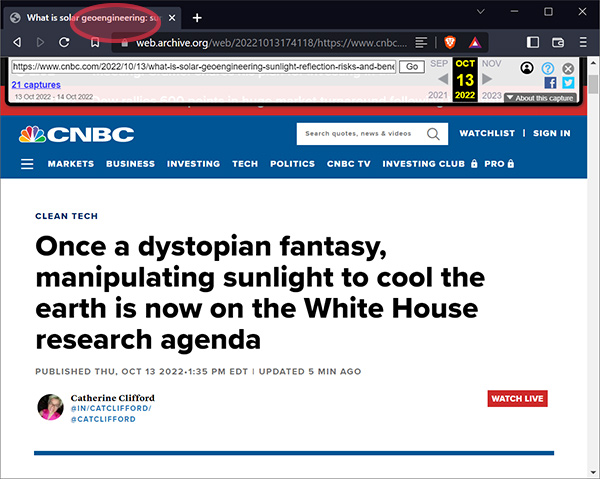 Later, CNBC stealth edited the article to take out “geoengineering” and the word “manipulating”: 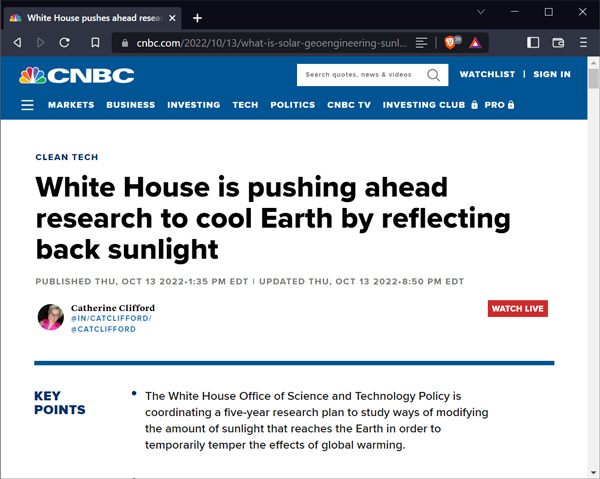 The article openly discusses geoengineering technologies and sunlight dimming. It claims this must be done to stop “global warming.”

Of course, global warming is a junk science fraud, and the real purpose of blocking the sun is to block photosynthesis that produces food crops to feed the world.

The three inputs of photosynthesis (required for all forests, crops, grasslands, ocean plants, etc.) are:

The depopulation globalists are at war with all three in their attempts to annihilate the human race and depopulate planet Earth. Here’s how they attack each vector:

As CNBC explains, “There are several kinds of sunlight-reflection technology being considered, including stratospheric aerosol injection, marine cloud brightening and cirrus cloud thinning.”

SAI tech is, frankly, just spreading pollution in the skies. They literally spray sulfur dioxide into the atmosphere, which is the exact same chemical that, in the 1980s, was blamed by the entire corporate media for causing “acid rain” and killing forests. Now, they promote this pollutant and claim it’s “good for the planet.”

So we literally have a “green” movement that is pro-pollution and claims that its pollution of the skies will save the planet from the sun. Because the sun is “bad,” they insist, and carbon is bad as well, even though all food crops are made of carbon which plants accumulate from CO2 in the air.

The entire climate change / global warming movement is actually an anti-human death cult of quack science pushers and life haters who are actively seeking to annihilate nearly the entire human population. To achieve this, they must starve billions to death (or murder them with mRNA injections, or kill them in global nuclear war). And to achieve starvation, they have to dismantle the infrastructure of food production which depends on rainfall (for rivers and irrigation), natural gas (for fertilizer) and diesel fuel (to power tractors and trains). They are also at war with all ranching operations and meat production in general, even claiming that Nitrogen is suddenly a pollutant as well.

Watch my bombshell mini-documentary, The Globalist War on the Elements of Life to fully grasp the nature of this war on humanity:

Hear my Situation Update podcast for full coverage of the barge-pocalypse, the war against humanity, the assault on Earth’s atmosphere and engineered crop failures:

– River barges are RUNNING DRY due to engineered drought
– Farmers forced to dump beans and grains on the side of river
– Barges move more grain and coal than any other form of transport
– Barge logjams increasing, and barge transport prices are surging
– Inflation numbers hit highest in 40 years
– Joe Biden “owned” by Broccoli as vegetables show 40% inflation spike
– Biden tries to pressure Saudi Arabia, gets cold-cocked with oil reductions
– White House officially pursuing geoengineering to dim the sun
– Globalists now at war with all THREE components of photosynthesis: Sunlight, CO2 and water
– AOC mocked by her own supporters for becoming pro-war shill for the establishment
– PayPal has NOT revoked its fining of users for posting “misinformation”
– Poland suspends air quality rules so citizens can BURN TRASH for heat
– Germany is burning 800 million covid masks for heat
– NHS declares it’s running out of blood … just 3 days of blood left
– German official claims all who protest energy prices are fascist enemies of state