A Walk on the Wild Side by James Howard Kunstler

The Leftist system is not meant to produce political stability or prosperity, and feels a lot like it is entering a death spiral. Getting the lunatics out of power, before they crash the entire West with no survivors, is the most urgent problem we face. — Eugyppius at Substack

Do you doubt anymore that the USA, indeed most of Western Civ, is in the grip of demonic possession? You can’t quite medicalize the problem by calling it a group psychosis because the people demolishing social boundaries know exactly what they’re doing and are shoving it in your face maliciously for the purpose of goading you into humiliation and punishment — which is predicably what will happen if you object to being mind-fucked.

Case in point: a shop teacher styling himself as “Kayla” Lemieux, comes to work wearing a grotesquely outsized fake boob costume. You are meant to say that this is okay because, hey, it is just a form of “gender expression” — so said the Halton District school board in Ontario, Canada. Of course, you know it’s not okay. The School Board only pretends that it’s okay, because this nonsense is supported by the Canadian federal government under the Woke-Marxist Justin Trudeau, which holds the levers of law and can crush you, subject you to its courts, bankrupt you, ruin you, if you don’t play along. 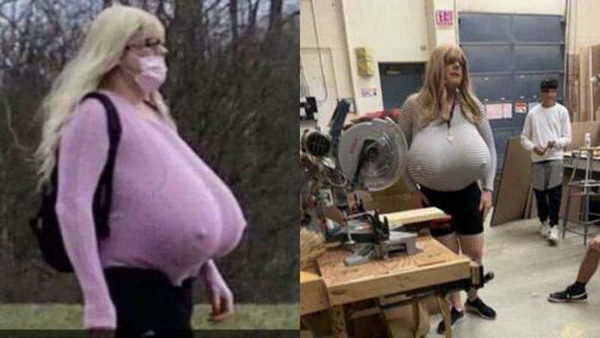 …and don’t you dare look at my boobs!

Who knew that the glorious George Jetson future would tip into a neo-medieval religious frenzy and, more to the point, one deriving its dark energy from the demonic and Satanic? You are asked to swallow ever-greater absurdities, destroying your self-respect because you know that you are a coward for not standing up to this host of degenerates.

The USA’s Democratic Party of Chaos is behind all of this lunacy. It has gotten so bad that many no longer even follow the news of serial outrages by the regime led (nominally) by the empty vessel called “Joe Biden.” Millions of border-jumpers have crossed into Texas and Arizona the past two years. The New York Times / CNN axis of news doesn’t cover it because they want it to continue. Apart from the economic refugees coming across there are substantial numbers of demonically murderous people, many of them not Mexican, but from all quarters of the world, including places with a grudge against our country. Not a few of them are identified as international terrorists. Yet, in they come. The welcome mat is out for them — while our joke of a president rails against “white supremacist domestic terrorists” (another lie you’re supposed to swallow).