The left stands for abortion, censorship of any opinion not their own, allowing children to be physically mutilated in the name of “gender identity,” violent protests causing billions in property damages, burning towns, while accusing those on the right of “insurrection” for one single protest that did far less damage than any of the riots during the year-long 2020 Antifa/BLM protests.

The point here is that the differences between conservatives and liberals, Republicans and Democrats, are far too vast already, and that gap is widening daily. 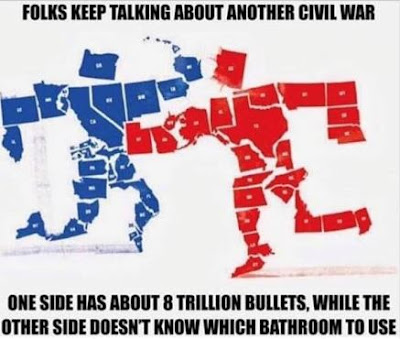 Now MSNBC is declaring “People keep saying a civil war is coming — I would say a civil war is here,” and that “we have to have serious conversations around preparing for actual violence.”

Nice of them to finally catch up to what has been happening in the country, was my first thought, and then I saw the host’s reasoning: “We can look at what has happened just in the past week alone since all this has happened. We’ve had two people try to declare war with FBI field offices.”

Well, who knew that years of burning down towns, looting minority-owned businesses, rioting, vandalizing federal and personal property, and attacking law enforcement officers across the country meant far less that “two people” taking the fight to what they believe is a corrupt FBI.

That ladies and gentlemen is the mindset of radical liberal extremists.

Moving along from the radical  liberals at MSNBC we note an article from late July from the similarly radical CNN, whining about how “red states” are building a nation within a nation, calling it an “offensive” against America.

The case was just the latest example of how red states, supported by Republican-appointed judges, are engaging in a multi-front offensive to seize control of national policy even while Democrats hold the White House and nominally control both the House and Senate. The red states are moving social policy sharply to the right within their borders on issues from abortion to LGBTQ rights and classroom censorship, while simultaneously working to hobble the ability of either the federal government or their own largest metro areas to set a different course.

Amazing how the writer of that doesn’t even see that this is what liberal state leaders have been doing for decades.

Just one example out of dozens because we do have more to cover, is Sanctuary Cities, where liberal state leaders welcome illegal immigrants/aliens into their states and violate federal law by refusing to allow their law enforcement top work with the U.S. Immigration and Customs Enforcement (ICE), by supporting and abetting criminals that cross the U.S. border illegally.

Once again the “rules for thee but not for me” mentality at play.

Brandon Smith over at Alt-Market has a piece out about this topic where at the end he concludes the following: