We can say Christian persecution. We know what it’s like. We are living through it right now. We have the numbers to prove it. We have the evidence to show the war on Christianity is real, it is happening right now and if you are reading this then you broke through the barrier.

Beginning in April 2022 there was a significant change in the volume of traffic Gospel News Network was receiving. The website had been growing at a very nice clip over the past several months. Gaining traction month after month. This is how organic growth of a website works. With this being the 5th professional website that I have either worked for or operated personally, this pattern has been witnessed multiple times over the past two decades. After about a year there is a little growth and during that year there would be an occasional spike in traffic. Then after about 18 months or so, the website would begin getting noticed and the volume of links “in the wild” would begin taking root. This, organically, pushes the website to a higher ranking on search engines like Duck Duck Go, Bing and Google.

When the links begin showing up closer to the top of search engines the website gets more traffic and it becomes a “feeding frenzy”. More links, more clicks, higher and higher ranking on search engines. The website then, well into the second year really begins growing at an amazing pace. The problem is, filthy satanic-globalist are watching and looking to cut the head off anyone that doesn’t support the atheist, one-world communist government narrative. To say that Gospel New Network does NOT support this narrative would be an understatement.

Let’s review some evidence to support what is being said. These are screen shots directly from the server showing the origin of traffic. Here is a year over year look – last full month, July 2021 / 2022

The first image is from July 2022. As you can see DDG and Goo are the top two search engines feeding traffic to the website. You will notice that DDG has a slight edge over Goo. This margin, as you will see, has retreated significantly over the past year. These people aren’t fools, they didn’t take it all at once, no, they walked it back over the course of three-four months.

Below is the same information from July 2021. As you can see DDG was way out ahead of Goo – by more than double the number of page views from Goo.

There is something rotten in Denmark, and that rot is coming from the search engine DDG. When you throttle searches you are censoring that website. This is what censorship looks like in the digital age. No need for “book burning”, this is modern day book burning.

Let’s look at a couple of other examples so you can see the depth of the problem. What you see, above, in the first example is about to get a lot worse.

The fist image below is August 2022. While the month is only 1/3 in the books, the trend is obvious. Instead of DDG being ahead of Goo it is 100% on par. If this trends continues that means the full throttling of Gospel News Network will be complete this month – just in time for the upcoming election cycle. It would be a-shame to have alternative, Christian conservative voices out there speaking against a corrupt, evil government and it’s minions. 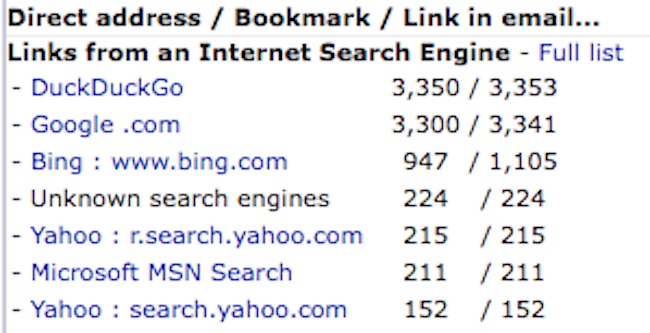 In the image below, from August 2021, the month in which Gospel News Network set sail for higher ground, and a lot more traffic, the ratio between DDG and Goo was more than four times!! That’s a complete departure from Goo to DDG by the people. This is when the satanic-globalist, communist at DDG first caught wind of Gospel News Network. Up to this point, they probably weren’t paying it any attention. But now, it’s beginning to get some traction. The Living Word is making a presence and the name of Jesus Christ is being spread around the world.

One last example and we’ll call it a day. There is absolutely nothing that can be done, at this time, about this situation. We must raise up, together, and have actual representation at the local, state and federal levels in order for this to change. Permanent Washington, the deep state, doesn’t want change, they want to keep their power and corruption.

The image above, once again directly from the server where Gospel News Network is hosted, shows the best month in our history. My guess is heads all around DDG exploded when this came across their desk. It is very obvious what is happening in March 2022. Gospel News Network is gaining a real audience, is spreading the Word of Jesus Christ, speaking out against the criminally-corrupt, satanic-globalist in Washington DC and their minions around the country and this must be stopped. The first example we provided was July 2022. Websites don’t lose that much traffic in that short a timeframe without there being a thumb on the scale.

DDG had climbed to almost 5x the number of page views as from Goo. More than 4x from Bing – Bing has since fallen off a cliff and has become completely inconsequential. It is not just Google, it is not just Duck Duck Go – it is all the major search engines. It is a world wide web, alright, the only question at this point is, how do we make it work for us instead of us working for it?