SAN ANTONIO, Texas — City leaders are apparently overwhelmed by the arrival of released migrants who later use local transportation hubs to reach other parts of the country. Breitbart Texas reviewed official correspondence and emails regarding a request to limit the number of daily migrant arrivals as local leaders level threats to bus them back to the Texas-Mexico border. One federal official even suggests piggybacking on Governor Greg Abbott’s initiative to bus migrants straight to Washington, D.C. as an alternative.

In a July 27 letter from the City to U.S. Customs and Border Protection plus nonprofit shelters in Del Rio and Laredo, a request is made to limit the number of migrants bused to the local Migrant Resource Center. The center provides respite to those who do not have a departure window of less than six hours to other parts of the country. Migrants with a departure time of less than six hours from their arrival in San Antonio are left directly at bus terminals or the international airport. 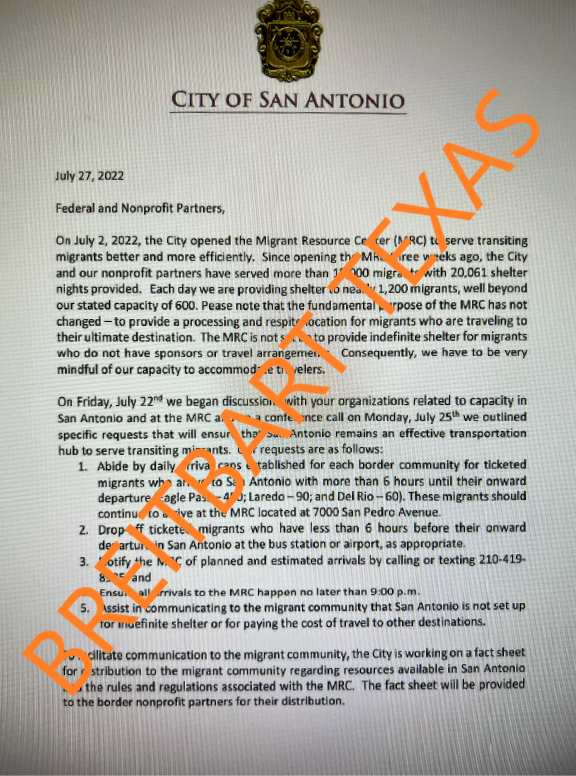 San Antonio is the latest city to join other metropolitan areas expressing displeasure with the growing border crisis under the Biden Administration. In July, District of Columbia Mayor Muriel Bowser formally asked the White House for an open-ended deployment of 150 National Guardsmen per day, plus a “suitable federal location” for a mass housing and processing center to accommodate buses of migrants sent by Texas officials.

New York City Mayor Eric Adams recently spoke out about the busloads also arriving from Texas and requested more federal funding to absorb the impacts not typically felt so far from the U.S.-Mexico Border.

Email correspondence provided to Breitbart Texas show the content and tone of conversations between CBP and a City of San Antonio representative which reference a threat to bus migrants back to the streets of Del Rio, Texas, should federal authorities fail to abide by the suggested municipal limits. The letter requests migrants bused to San Antonio from the border cities of Laredo, Del Rio, and Eagle Pass together be limited to no more than 600 per day.