Turning The U.S. Into An International Laughingstock

I would also like to note the “image” we are portraying to other countries by the  choices Joe Biden has made.

One image says it all.

Think what you want about transgenders, but remember that hostile nations look at the proudly displayed images like the one above, and the fact that this is who represented America at the French Ambassador’s residence to celebrate Bastille Day, and it certainly doesn’t promote confidence in America’s strength.

Right or wrong, other countries perceptions of the United State is what either prevents them from attacking, or encourages them to attack.

These types of decisions on who represents the U.S. on behalf of the Biden regime, indicate not a “progressive” administration, but one where the “leader” quite literally makes us look the weakest we have ever been.

Joe Biden’s diminished mental capacity has become even more pronounced of late. It goes far beyond the confusion,  gaffes,  falling off his bike, falling up the stairs, and the new excuse  of “he has Covid,” and has become a national security threat.

Not just his decisions, or the fact that other countries are relentlessly mocking him, but the weakness seen in that diminished mental capacity is a temptation to hostile nations to attack the U.S., whether cyber attacks, terrorist attacks, or to simply make bold moves globally, knowing America is too weak to stop them.

Or rather lacks the strong leadership to respond appropriately.

In the past Americans could at least depend on a competent VP standing in the wings in the event Biden dies or is incapable of performing his duties, which many believe has already happened, but that is not as comforting a thought in regards to Kamala Harris as it has been for past VP’s.

Two recent video clips have been making the rounds and both are incredibly worrisome because they are going viral, meaning those hostile nations mentioned earlier, are seeing what America’s “leadership” has become. 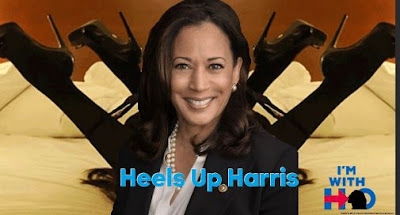 “I am Kamala Harris, my pronouns are she and her, and I am a woman sitting at the table wearing a blue suit.”