As you might imagine, the last time I talked to the team at Birch Gold Group, the topic of inflation came up. I think this is a crucial matter for every American to understand.

Let me start with a fact about how money used to work. According to Michael D. Bordo, professor of economics at Rutgers University:

Whatever other problems there were with the gold standard, persistent inflation was not one of them. Between 1880 and 1914, the period when the United States was on the “classical gold standard,” inflation averaged only 0.1 percent per year.

In other words, if governments really cared about price stability, they’d adopt a gold standard!

Now, here’s why they won’t…

The cost of maintaining economic stability

The Federal Reserve was founded in 1913 to do one thing: maintain economic stability.

Now, economic stability is a good thing! That’s what enables families and corporations to plan for the future. Lack of stability creates uncertainty, reduces confidence in the economy and encourages short-term thinking at the expense of long-term planning.

I’m a big fan of a generally stable, prosperous economy.

These days, the Federal Reserve’s economic goals are:

Here’s the problem: the Fed’s definition of “stable prices” results in a guaranteed loss of 2% of your purchasing power every year.

Why? Well, because they say so:

The Federal Open Market Committee (FOMC) judges that inflation of 2 percent over the longer run, as measured by the annual change in the price index for personal consumption expenditures, is most consistent with the Federal Reserve’s mandate for maximum employment and price stability.

Notice, also, that “over the longer run” part of the statement above. That’s part of Federal Reserve Chairman Jerome Powell’s current list of excuses for today’s 8.6% inflation (over four times their goal!)

Now, let me ask you, which of these is better for price stability? Annual price increases of:

For me personally, I’m a big fan of knowing today’s money will still be worth about the same in the future! So let’s do a little math. Let’s put $1,000 under the mattress for ten years. After a decade, that $1,000 would be worth: 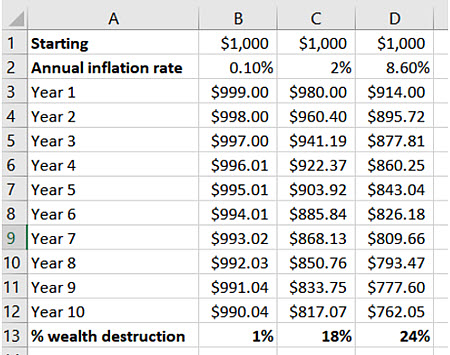 I simply cannot stress this enough:

The Federal Reserve’s goal is to destroy your purchasing power at “only” 2% per year.

Even at a “moderate” 2% rate, it’s taking a toll on your savings.

The 2% number seems arbitrary, even capricious, to me. Here’s the Federal Reserve’s explanation of why 2% wealth destruction per year is a good thing: