It is sort of funny, but recently I have read a few articles that seem to confirm my older stories of “The Thing” from last October and the Graphene Hydroxide “Razors” as found in the November article that followed up on the first.  After that there were a number of articles that claimed there were microchips and self assembling radio transmitters or spy chips or whatever coming together in the blood stream.  Of course, the official propaganda outlets and the “fact checkers” were quick to disclaim all of those theories with claims that they were faked or the videos were of something else entirely.   I tended to agree with them that it was false, and still do but there has been some new information collected that show my original stories were correct.  There are also some that show my rejection of the nano-chips may not have been correct as well, but we will get to that later on.  First a couple of recent articles we need to go over.

A couple weeks ago there were a number of articles that approximately covered the renewed interest in whatever is being injected besides the Bio-Weapons as the story in Insider (a left wing propaganda outlet) titled “20% of Americans believe the conspiracy theory that microchips are inside the COVID-19 vaccines, says YouGov study” and they said “A new study has found that 1-in-5 Americans believe that it is “definitely true” or “probably true” that there is a microchip in the COVID-19 vaccines” and although I tend to agree we must also say that the polling company YouGov “What the World Thinks” is a global opinion and data company that puts things together to support the Globalists agenda.  So let’s temper that with Alex Jones show News Wars videos that shows microscopic videos of “Engineered Bio Structures Removed From Blood Vessels” and although I still do not believe the nano-electronics as stated in so many stories, there definitely exists structures that are produced by those murderous kill shots.  That News Wars link has a couple of other videos showing massive clots; not the usual blood clots, but massive structures that are involved in the Sudden Adult (and children) Death Syndrome.  They are worth watching if you have not before now.

“Lead researcher, Dr. Daniel Nagase is a former ER doctor who was persecuted for using ivermectin to treat covid-19 patients in Canada…. When the contents of the vaccine were put under an electron microscope, Dr. Nagase was able to identify basic elements like carbon and oxygen. “You would expect to see carbon, oxygen, nitrogen, and phosphorus – all the things you would normally see in a protein,” Nagase said. However, none of the samples contained nitrogen or phosphorous, not in the X-ray spectroscopy or the electron microscope images….  every living thing, whether it’s a virus, plant or animal, is made up of proteins that contain nitrogen, carbon, oxygen, and phosphorus… One of the non-biological life forms (in the Moderna vaccine) contained neurotoxic aluminum and looked like a “ball with the legs growing out of it.”   This from a Natural News story last month that also proves my October column on those things I called “The Thing”. 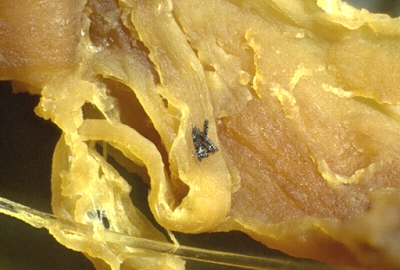 Another story that came out a couple of weeks ago comes from Vaccine Deaths, which is a page devoted to Ethan Huff articles, and the story I want to bring up is titled “Health Ranger conducts live microscopy analysis of “engineered biostructure” clots collected from deceased covid jab victims” which is another article showing the Mike Adams interview.  I bring this second one up so you have a great place to find many stories on the kill jab by Ethan Hunt.  USSA News story also from a couple of weeks ago covered the Mike Adams story with still photos of those structures that are very compelling.  I have included a few of those that seem to show silicone microchip particles and as their caption states, “This series shows something that appears to resemble silicon-based microchip structures, although I cannot claim with certainty that this is a circuit of any kind. It simply resembles what micro-circuitry looks like at similar magnifications.”  Again, I do not think so and would suggest they are other possible Graphene structures of some sort instead.  I suggest going to that USSA News story for more photos if you are interested as I find them fascinating.