Hunger Games 2020-2030: What We Are Experiencing Right Now Was Planned In 2015 by Randolph Jason for Gospel News Network

This Tweet showed up in my feed a couple of days ago and it seemed important so I put on a shelf until I could pay attention and dig in. It turns out, the inspiration was spot on. This explains a lot of what we are experiencing, right now, under the Biden regime, in conjunction with Ukraine, the EU and Russia. All part of the plan.

Listen very carefully to what this young lady has to say as it is not her words. She is merely reading from an article – that I can’t find anywhere {appears to have been scrubbed} – that explains what is happening in our food supplies with the fires, explosions, the war Ukraine and other tidbits that all go together.

This is very interesting ‼️‼️‼️
PLANNED IN 2015 – HUNGER GAMES☝🤔🙏👇👇 pic.twitter.com/rSwPg0Xezf

Now, this LINK takes you to supporting documents for the article in the Tweet above. There’s a PDF file in the lower right corner of the landing page. CLICK HERE >>>

If you still believe the World Wildlife Federation (WWF), you know the agency with the cute little Panda bear logo, is something of a godly organization doing the right thing for the animals, well, you would be mistaken – in a huge way.

Here is an excerpt from an article – How a new game helped us understand the future of food – written, in 2016, by their staff in support of the hunger games article originally produced by Cargill, which is the article in the Tweet.

By 2030, the inevitable had happened. A coup in Pakistan. Flooding in Bangladesh. The world’s farmers were breaking under the pressure of volatile commodities prices. Reliable food supplies couldn’t be relied on anymore.

Policymakers across continents initially reacted to these developments with ad hoc responses, ranging from a meat tax throughout the European Union to increased humanitarian aid. But the crisis continued unabated, and volatility in food prices became the new normal. Finally, governments, business, and multilateral institutions came together to increase food stockpiles and enact a universal carbon tax to lessen the possibility of a future shock to the global food system.

This scenario was part of Food Chain Reaction: A Global Security Game, hosted by WWF, Cargill, the Center for American Progress, Mars, Inc., and game designer CNA (formerly known as the Center for Naval Analyses). Held at WWF headquarters in Washington, DC, this past November, the two-day simulation revealed how governments, institutions, and private companies might respond during a future crisis in the world food supply.

Food security affects everyone. But it is also an opaque cobweb of competing interests, and it can be difficult to pinpoint solutions. We tend not to think much about the issue until a humanitarian crisis strikes and we are spurred to act. Taking steps to prevent such a crisis, and to grow enough food sustainably, is a worldwide challenge.

Never forget these satanic-globalist hate you, hate your family and especially hate you reproducing. Although, they need the children for the adrenochrome.

And of course an associate who’s work we have followed for more than a decade recently wrote about all this coming to light back in 2021.

You know how Event 201 was just the most high profile in a string of “simulations” and “scenarios” (including Clade X, Crimson Contagion, Lock Step and SPARS) that just happened to predictively program the fear of a global coronavirus pandemic into the minds of the global political and managerial class?

And you know how those “exercises” (like the multiple war games that just happened to coincide with the catastrophic, catalyzing events of 9/11) not only anticipated our current predicament, but, more importantly, laid the groundwork for the current global governmental response to the scamdemic—the creation of vaccine passports, the erection of the biosecurity grid, the crackdown on the “infodemic” of online “disinformation,” etc.?

Now, what if I were to tell you that there have been a number of simulations that have taken place in recent years that have similarly spelled out the globalists’ game plan for the post-scamdemic world in black-and-white?

Well, brace yourself. The global planners have been crafting simulations, war games and exercises to simulate our responses to the crises they are intending to create in the coming decade. And, as serious as all of the above-named simulations were, these ones foretell of an even darker vision for humanity in the years to come. . . .

The Players Set the Stage 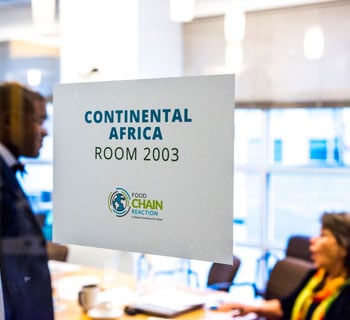 In November of 2015—as you can learn from an official press release on the Cargill website—”65 international policymakers, academics, business and thought leaders gathered at the World Wildlife Fund’s headquarters in Washington DC to game out how the world would respond to a future food crisis.” Over the course of two days, the participants in this “Food Chain Reaction” crisis simulation role played a response to a number of converging and overlapping crises in the 2020s, including “two major food crises, with prices approaching 400 percent of the long term average; a raft of climate-related extreme weather events; governments toppling in Pakistan and Ukraine; and famine and refugee crises in Bangladesh, Myanmar, Chad and Sudan.”

Among the expected corporate platitudes and blather about “staying ahead of the curve” in order to “get it right,” the World Wildlife Fund highlights the key takeaway from this exercise: “Only by stopping agricultural expansion, augmenting agricultural production, increasing resource-use efficiency, and reducing food waste, can we provide the food and nourishment we need, while ensuring we are conserving nature for future generations.”

I’ll let you stew on the implications of that statement on your own time, but the game—which, we are assured, “was built over the course of months, with maximal realism in mind”—went on to envision some very specific scenarios that look like they are on track to becoming stone cold reality, like “a steep price spike with looming global food shortages in 2022” that prompted the EU players to impose a tax on meat. But here’s the kicker: this “game” ended with the imposition of a global carbon tax. Continue Reading / Corbett Report – Minds >>>