You know how Event 201 was just the most high profile in a string of “simulations” and “scenarios” (including Clade X, Crimson Contagion, Lock Step and SPARS) that just happened to predictively program the fear of a global coronavirus pandemic into the minds of the global political and managerial class?

And you know how those “exercises” (like the multiple war games that just happened to coincide with the catastrophic, catalyzing events of 9/11) not only anticipated our current predicament, but, more importantly, laid the groundwork for the current global governmental response to the scamdemic—the creation of vaccine passports, the erection of the biosecurity grid, the crackdown on the “infodemic” of online “disinformation,” etc.?

Now, what if I were to tell you that there have been a number of simulations that have taken place in recent years that have similarly spelled out the globalists’ game plan for the post-scamdemic world in black-and-white?

Well, brace yourself. The global planners have been crafting simulations, war games and exercises to simulate our responses to the crises they are intending to create in the coming decade. And, as serious as all of the above-named simulations were, these ones foretell of an even darker vision for humanity in the years to come. . . .

The Players Set the Stage

In November of 2015—as you can learn from an official press release on the Cargill website—”65 international policymakers, academics, business and thought leaders gathered at the World Wildlife Fund’s headquarters in Washington DC to game out how the world would respond to a future food crisis.” Over the course of two days, the participants in this “Food Chain Reaction” crisis simulation role played a response to a number of converging and overlapping crises in the 2020s, including “two major food crises, with prices approaching 400 percent of the long term average; a raft of climate-related extreme weather events; governments toppling in Pakistan and Ukraine; and famine and refugee crises in Bangladesh, Myanmar, Chad and Sudan.”

Among the expected corporate platitudes and blather about “staying ahead of the curve” in order to “get it right,” the World Wildlife Fund highlights the key takeaway from this exercise: “Only by stopping agricultural expansion, augmenting agricultural production, increasing resource-use efficiency, and reducing food waste, can we provide the food and nourishment we need, while ensuring we are conserving nature for future generations.”

I’ll let you stew on the implications of that statement on your own time, but the game—which, we are assured, “was built over the course of months, with maximal realism in mind”—went on to envision some very specific scenarios that look like they are on track to becoming stone cold reality, like “a steep price spike with looming global food shortages in 2022” that prompted the EU players to impose a tax on meat. But here’s the kicker: this “game” ended with the imposition of a global carbon tax.

Oh yes, the global controllers can’t go three minutes without invoking their favourite bogeyman, the Climate Scare, to impose greater control over humanity, and this “war game” only proved that rule. In this case John “Pizzagate” Podesta, as one of the “Key Players and Game Control Staff” steering the exercise, helped guide the gaggle of globalist gophers—including representatives from multilateral institutions like the World Bank, the International Finance Corporation and the United Nations Environment Program, as well as industry executives from companies like Louis Dreyfus Commodities, MARS, Inc. and Thomson Reuters—toward the pre-ordained conclusion that the only way to placate the weather gods would be to institute a global tax.

If all of this seems familiar, that’s because it is. In fact, the whole sordid Food Chain Reaction scenario only mirrors other recent “simulations” and “scenarios” from the global jet set crowd, including the Rockefeller Foundation’s “Reset The Table” report calling for the consolidation of globalist control of the global food supply and the ChiCom’s “Clean Your Plate Campaign,” which aims to bring technocratic management of the economy into every citizens’ dining room by monitoring and punishing “food wastage” and more tightly controlling food production processes.

All of these initiatives (and many more like them) are all aiming in the same direction: to use perceived crises (whether real or fake, genuine or generated) to “transform” the global food supply from farm to fork, eliminating small farmers in favour of global agribusiness and transitioning us into a world where the only dining options available are GMOs, bugs, lab-grown “meat” and other frankenfoods.

And the worst part is that the “food crises” that these “simulations” have long envisioned are quickly becoming a reality.

The Game Plan Comes to Life 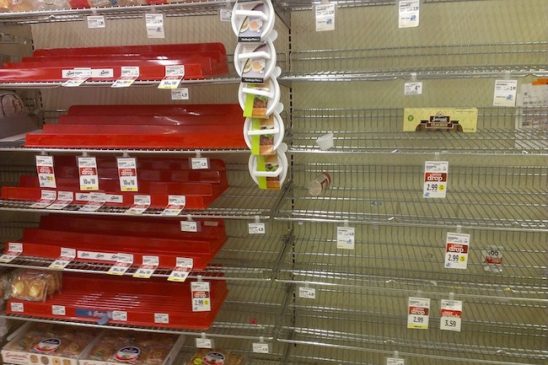 As Christian “Ice Age Farmer” Westbrook reveals in his latest podcast, the Food Chain Reaction “simulation” wasn’t just some far-fledged vision of a possible future dystopia. In fact, if you’ve been following the headlines, it is increasingly looking like another of those globalist “exercises” that just happen to become reality.

As I write, soaring natural gas prices are resulting in a nitrogen fertilizer shortage, which in turn is helping to fuel food price inflation. This has led Russia to impose nitrogen fertilizer export quotas, exacerbating problems in the agricultural sector, which is already reeling from China’s September decision to halt all exports of phosphate, another key ingredient of commercial fertilizers. The pinch is already being felt by farmers around the world, with the Brazilian Agriculture and Land Reform Commission taking up the issue as a major food security threat and the Indian Air Force helping to secure fertilizer shipments to Sri Lanka.