What is the image of the beast? from Compelling Truth

GNN Note – The image above showed up at Rockefeller Center in New York City in the fall of 2021. It has some of the characteristics of the beast. Not sure why anyone would think this is “art” that should be on display in a public setting, unless they were sending a signal.

This one showed up about a week later but was quickly taken down. Two images, two renderings, two ideas of what will be at the gate of the anti-christ’s palace? OR is it just another tool, another sign of how deep and how wide this Spiritual War reaches? You decide. 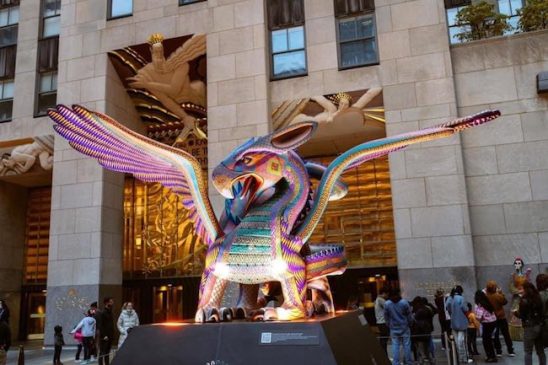 There are two beasts described in John’s vision in Revelation 13. The first beast represents the Antichrist and a group of nations and leaders who will fight against God and His followers. It is a leopard-like creature with seven heads and ten horns and has been given authority from the dragon, who is Satan. The second beast represents the False Prophet who will deceive people into worshipping the first beast. It is a lamb-like creature with two horns and the mouth of a dragon. It also has authority from Satan.

Previously scholars thought this image of the beast would be something akin to a statue that had a lifelike appearance. With current technological advances others have proposed that it could be a hologram, an android, or even a human clone. Regardless of the exact nature of this image, it will be a focal point for worship of the Antichrist. Some biblical scholars believe it may be the abomination of desolation described in Matthew 24:15 and Daniel 9:27, the idea being that the image will be set up in the rebuilt Jewish temple.