The Myth of Sponsorship: The Role of The Big Book Sponsor

“Lack of power, that was our dilemma. We had to find a power by which we could live, and it had to be a Power greater than ourselves. Obviously. But where and how were we to find this Power? Well, that’s exactly what this book is about. Its main object is to enable you to find a Power greater than yourself which will solve your problem.” (Alcoholics Anonymous. 45)

Another thing I hear it all the time is, “Who is your sponsor?” When I reply, “I don’t have a sponsor”, I get an endless tirade of, “You know a person who sponsors them self, has a fool for a sponsor”. Now, when I came into the program, I had someone sit down with me and show me how to work the steps. After working the steps he then told me to show others how to work steps. And, that’s what I have been doing for the past several years, teaching others how to work the Twelve Steps and how to teach others to teach others to work the Twelve Steps. Occasionally, I will call the man who showed me “How It Works” to sometimes clear some Step Five work or discuss approaches on Step Nine, but mostly I call to talk about working with newcomers. And, he sometimes calls me to clear up some Step Five work or some other aspect of the program, but mostly he call me to discuss working with others.

Once again, no where in first 164 pages of the Big Book of Alcoholics Anonymous does it ever recommend that I call a “sponsor”. When I need direction or guidance, the Big Book is very clear about who I should contact: “…he (Bill W.) was convinced of the need for moral inventory, confession of personality defects, restitution to those harmed, helpfulness to others, and the necessity of belief in and dependence upon God.” (Alcoholics Anonymous. 3rd ed. xvi)

After making our review we ask God’s forgiveness and inquire what corrective measures should be taken. (Alcoholics Anonymous. 86)

We consider our plans for the day. Before we begin, we ask God to direct our thinking, especially asking that it be divorced from self-pity, dishonest or self-seeking motives. Under these conditions we can employ our mental faculties with assurance, for after all God gave us brains to use. (Alcoholics Anonymous. 86)

In thinking about our day we may face indecision. We may not be able to determine which course to take. Here we ask God for inspiration, an intuitive thought or a decision. (Alcoholics Anonymous. 86)

We usually conclude the period of meditation with a prayer that we be shown all through the day what our next step is to be, that we be given whatever we need to take care of such problems. (Alcoholics Anonymous. 87) 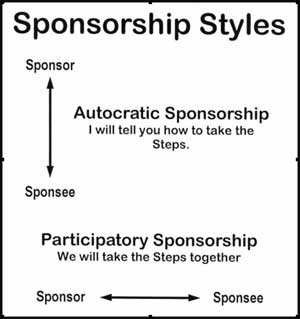 The role of the Big Book Sponsor is to teach the newcomer how to work a Twelve Step Program and show them how teach other newcomers to do the same.

Dr. Silkworth writes: “In the course of his (Bill W.) third treatment he acquired certain ideas concerning a possible means of recovery. As part of his rehabilitation he commenced to present his conceptions to other alcoholics, impressing upon them that they must do likewise with still others. This has become the basis of a rapidly growing fellowship of these men and their families. This man and over one hundred others appear to have recovered.” (Alcoholics Anonymous. 3rd ed. xxiii)

The Big Book gives explicit instructions on how to approach and work with the newcomer:

But the ex-problem drinker who has found this solution, who is properly armed with facts about himself, can generally win the entire confidence of another alcoholic in a few hours. Until such an understanding is reached, little or nothing can be accomplished. (Alcoholics Anonymous. 18)

That the man who is making the approach has had the same difficulty, that he obviously knows what he is talking about, that his whole deportment shouts at the new prospect that he is a man with a real answer, that he has no attitude of Holier Than Thou (that means we are not saints nor are we crusaders or mission makers), nothing whatever except the sincere desire to be helpful; that there are no fees to pay (that means the program is freely given to others and that there is to be no professional class of therapy or counselling), no axes to grind (we’re not here to have windy arguments or frothy debates with the newcomer), no people to please (that means no ass-kissing), no lectures to be endured (that means we are not here to judge or run your life)-these are the conditions we have found most effective. (Alcoholics Anonymous. 18-19)