First it was a sun, now China has built an artificial moon that simulates low-gravity conditions on Earth by Ricky Scaparo for End Times Headlines

China's "artificial sun" set a new world record after superheating a loop of plasma to temperatures five times hotter than the sun for more than 17 minspic.twitter.com/5rd9mCPDKY

China has built a research facility that simulates the low-gravity environment on the moon – and it was inspired by experiments using magnets to levitate a frog.

South China Morning Post reported that the facility could provide valuable research for China’s lunar exploration activities, according to scientists involved in the project. Located in the eastern city of Xuzhou, in Jiangsu province, the simulator is expected to be officially launched in the coming months. 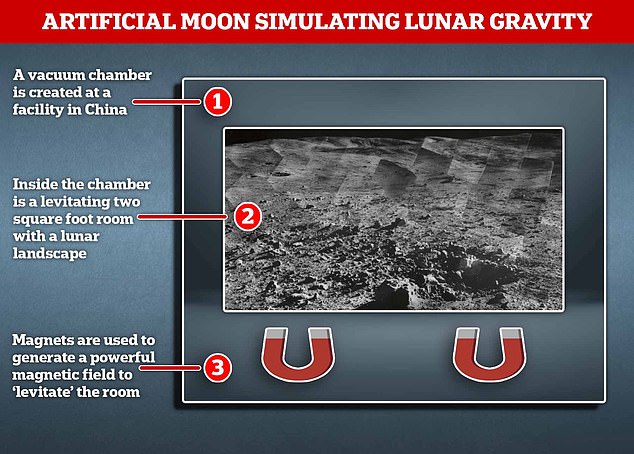 Lead scientist Li Ruilin, from the China University of Mining and Technology, said it was the “first of its kind in the world” and would take lunar simulation to a whole new level. The simulator can make gravity “disappear”, Li said in an interview on Tuesday. While low gravity can be achieved in an aircraft or a drop tower, it is momentary. Li said in the simulator that effect can “last as long as you want”.

Currently, simulating low gravity on Earth requires flying in an aircraft that enters a free fall, then climbs back up, or falling from a drop tower, but that lasts minutes. Daily Mail stated that the new lunar simulator, which is a small 2ft room sitting in a vacuum chamber, can simulate low or zero gravity ‘for as long as you want,’ explained its developers.

Inside the 2ft room, they have created an artificial lunar landscape, made up of rocks and dust that are as light as those found on the surface of the moon. Gravity on the moon is about a sixth as powerful as that on Earth, and inside the artificial gravity room, the team makes use of a strong magnetic field to simulate the ‘levitation effects’ of a low gravitational force.