LAPD Is Forcing EVERYONE, Suspects or Not, to Reveal Social Media User Names and More by Aden Tate for The Organic Prepper

GNN Note – I don’t about you, but I stopped using “social media” before My Space shut down. /END

The notion of government workers monitoring your social media is probably not news to you. I believe Edward Snowden blew the lid off of this can of worms years ago. However, have you considered that those very same people may now force your social media usernames out of you should they stop you on the street?

Yet that’s precisely what’s happening in Los Angeles right now. Apparently, it has been happening for years.

How was this discovery made?

Within New York University is a non-profit organization known as the Brennan Center for Justice. Early last year (2020) the NPO law/public policy institute submitted a request for information on how LAPD used social media to monitor people and groups. [source]

According to the Brennan Center, the information they were given revealed that LAPD offered little guidance and minimal oversight over officers’ surveillance on social media platforms. The center went on to state:

Few limitations offset this broad authority: officers need not document the searches they conduct, their purpose, or the justification. They are not required to seek supervisory approval, and the guide offers no standards for the types of cases that warrant social media surveillance. While officers are instructed not to conduct social media surveillance for personal, illicit, or illegal purposes, they seem otherwise to have complete discretion over whom to surveil, how broadly to track their online activity, and how long to monitor them.

Despite endowing its officers with broad authority to surveil social media, the LAPD has done little to ensure these powers aren’t abused.

How did the LAPD collect this information? 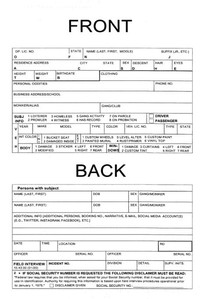 LAPD has been carrying “field interview cards.” LAPD officers can stop anyone, whether they are arresting them or not, and ask them to fill these cards out. [source] It’s up to the officer’s discretion whether the field interview card is filled out or not. Interestingly, information the card collects includes social media handles, usernames, email addresses, and profile page URLs. [source]

Let’s say you have an Instagram account where you follow Iraqveteran8888, Demolition Ranch, Lucky Gunner, or other firearms-related accounts exclusively. Now that information has been tagged to your name directly by a police department.

Regulations in place state that an officer is not allowed to sign in to a citizen’s online account. Officers are supposed to get a search warrant if they want to delve in such a manner. However, officers are allowed to create a “fictitious online persona” to collect information for investigations. [source]