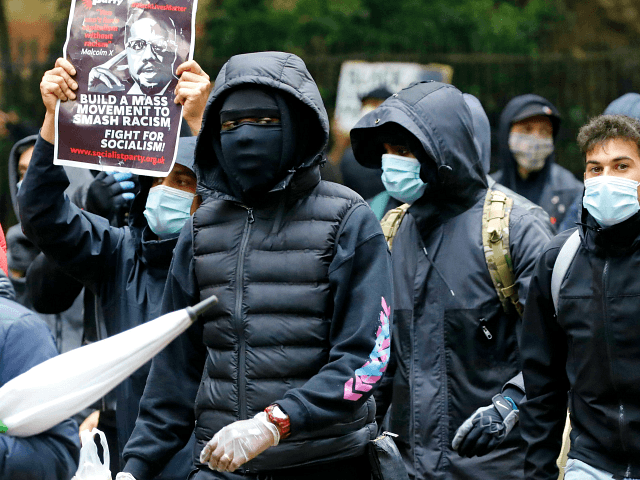 “As Israel moves forward with the annexation of the West Bank, and mainstream British politics is gagged of the right to critique Zionism, and Israel’s settler colonial pursuits, we loudly and clearly stand beside our Palestinian comrades,” the group declared, hailing their supposed brothers-in-struggle with terminology commonly if not exclusively used among the far left and unreconstructed communists — and adding an emphatic “FREE PALESTINE”.

The tweet, the first in a nine-part tweet on the subject of Palestine and Zionism, may have been prompted by the sacking of former Labour leadership contender and Jeremy Corbyn ally Rebecca Long-Bailey from the British opposition party’s Shadow Cabinet by party leader Sir Keir Starmer.

Long-Bailey had shared an “approving tweet” about an interview in which actress Maxine Peake suggested that, as the left-wing Guardian put it, “the U.S. police tactic of kneeling on someone’s neck was taught by the Israeli secret service.”

As Israel moves forward with the annexation of the West Bank, and mainstream British politics is gagged of the right to critique Zionism, and Israel’s settler colonial pursuits, we loudly and clearly stand beside our Palestinian comrades.

Black Lives Matter UK took aim not just at Israel but also at the United Kingdom, noting that Palestinians in Britain have “called for the active protection and promotion of ‘accurate information about current and past events in the life of the Palestinian people, as part of Britain’s ongoing, and outstanding, colonial debt.”

Mandatory Palestine, as the territory now comprising Israel was then called, was a British protectorate for a brief period after the end of the First World War, during which the British government committed to the creation of a homeland for the Jewish people in the area with the Balfour Declaration.