Editor’s Note: In years past, Russia was famous for its severe problems with alcoholism. But times are changing. Just within the past few years, alcohol consumption in Russia has been reduced by 80%.

Such encouraging news is thanks to the power of prayer, and to the work of people like Metropolitan Sava and Fr. Alexander Goryachev, who not only pray for individuals, but also pray for the inhabitants of an entire city, literally blessing the entire city with holy water from an airplane. The current story takes place in Tver, a major city just northwest of Moscow.

The traditional religious flight on Sobriety Day on September 11 started from Zmeyevo airfield. Priests poured holy water from the airplane from the city, Metropolitan Sava of Tver & Kashinsky read a prayer service and circled Tver with the relics of Tver saints. On board the plane, in addition to the clergy, a married couple flew, and the husband was miraculously cured of drunkenness.

And this is no joke. In Tver, there are real cases of miraculous deliverance from drunkenness, says Alexander Goryachev. He is the chairman of the parish council of the Cathedral in honor of the “Inexhaustible Chalice” icon of the Mother of God. He organizes these events, and he enjoyed talking about the people who have been helped:

Since 2006, we have been flying over Tver with the “Inexhaustible Chalice” icon, which is one of this city’s most holy objects. Believe it or not, one day while a man saw a plane flying, he admitted to his wife that he was addicted to alcohol. The couple was reunited after he was delivered from drunkenness. Multiple couples in Tver have come to us with similar stories. 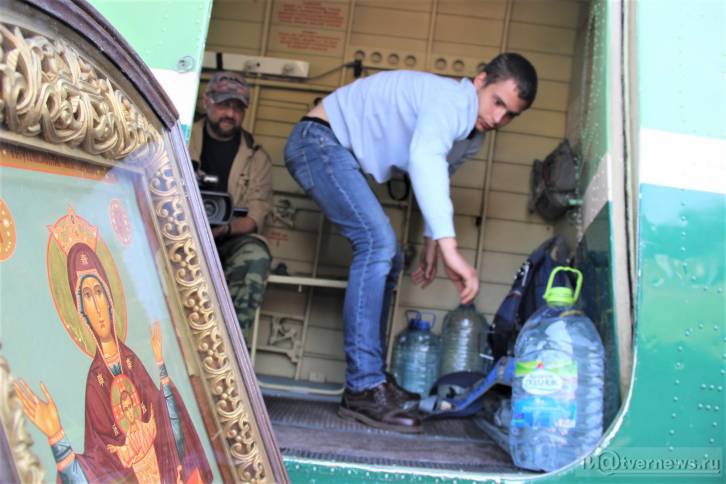 Many come from other cities to pray, and to give a vow of sobriety to the “Inexhaustible Chalice” icon. And not only do they stop drinking here, but in a number of cases they also find their soul mates. Today, couples will give a general vow of sobriety — there will be no alcohol in their life from this point on. In addition, they will instruct other people on the true path of sobriety.