Prophecies for the Future – by Edgar Cayce from World-Mysteries

Almost every day, several times a day, for more than forty years, Cayce would induce himself into an altered out-of-body state of consciousness and reveal profound information on various subjects such as health, dreams, meditation, religions, and reincarnation, to name a few. But it was the information that Cayce revealed about the future which he is probably most known for. 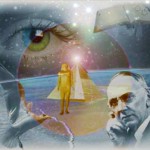 He provided information about the history of humanity from the very beginning to a time in the future when humans will evolve into beings with supernatural powers.
He described a new era of enlightenment and peace when divinity within humans would be manifested on the earth. But before this “kingdom of God” would rule the world, Cayce foresaw world events that can only be described as apocalyptic, a period of purification involving natural disasters that will dramatically alter the surface of the earth, wars, economic collapse, and socio-political unrest. These visions of the future agree with what is known about prophecies from NDEs.

Cayce believed that these horrible future events could be averted if humanity changed its behavior. And this is the purpose for giving prophecies – to warn people to change so that the prophecies won’t happen. Since Cayce certainly was not 100% accurate in his predictions, I believe this only shows how some of Cayce’s apocalyptic predictions have been averted. So, a successful gloom and doom prophecy is one that does doesn’t occur. Cayce’s prophecies became well-known all over the world and a case may be made that he may have had some influence in creating the change within people to alter the course of history enough so that the prophecy would not happen. Cayce would repeatedly say that even the Lord of Lords could not accurately predict future events because human free will can alter and change the future. Cayce is referring to the Biblical account when Jesus is asked when he would return. His reply was:

So, prophecy is never given for any other purpose than as a warning. For this reason, a successful prophecy is one that has been averted and therefore does not happen. Skeptics of Cayce’s prophetic ability like to point out that because some of his predictions did not happen, this means he was a fake. But from another perspective, one can say that his prophecies helped to change enough people to prevent them from occurring.

Cayce envisioned that a time would come when all individuals would realize their responsibility toward one another – a realization that would change the thought of humanity. During the height of World War II, he saw the possibility of a united world and a renewed sense of spirituality all over the world. When asked in 1944 which religious thought would lead the world toward the greatest amount of spiritual light and understanding, the reply was simply, “You shall love the Lord your God with all your heart, and your neighbor as yourself!”

What follows are a few of Edgar Cayce more famous predictions made between
1934 and 1941 — long before Gordon-Michael Scallion and other psychics began making similar predictions.