Actual demonic energy now channeling out of drag queens as humans morph into creatures from hell, right in front of children by: Ethan Huff for Natural News

Renton Public Library in Renton, Washington, recently held a so-called “teen pride” event that featured a deranged, gender-dysphoric young man dressed as a woman who actually got down on all fours and started roaring incoherently like a demon from hell, this being the latest installment of satanic LGBTQ propaganda aimed at America’s impressionable youth.

This bizarre drag show was part of a “pride celebration designed by teens for teens” which, according to an advertisement that appeared on the Renton Public Library website, also featured “Safer sex presentations! A drag show! Free swag! (and a) Free binder raffle!”

In case you’re unfamiliar with what a “binder” is, it’s a device that a transgender “man,” meaning a woman pretending to be a man, can use to flatten “his” breasts in order to look more “masculine.” At the Renton Public Library “teen pride” event, chest binders were handed out “to help eight self-hating girls mutilate their bodies,” according to activist Kaeley Triller Harms, who spoke out against the horrors that she witnessed. 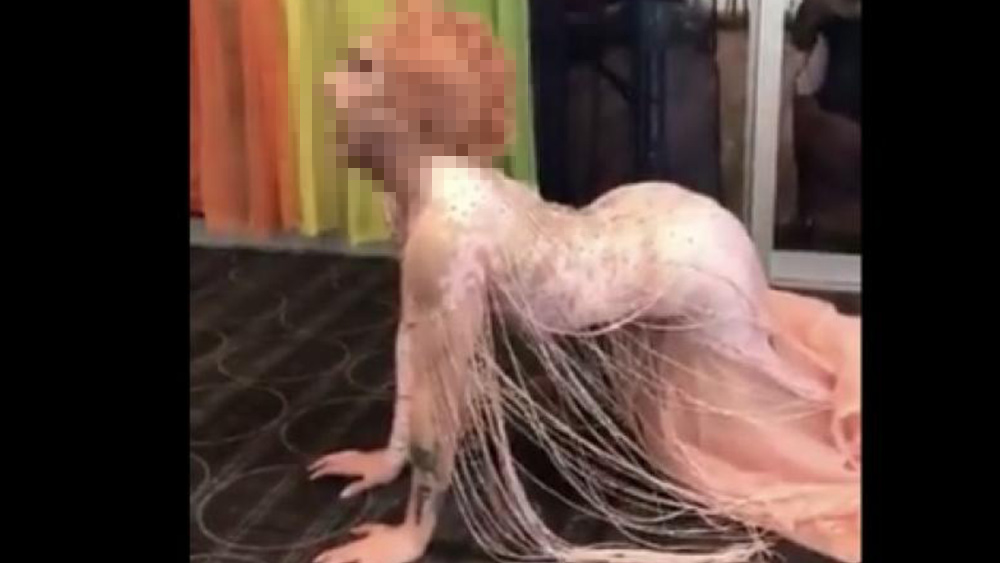 On her Twitter page, Harms posted a video clip of the drag portion of the event, which depicts the young man in drag quite literally morphing into what would appear to be some kind of creature from hell. One can only imagine the demonic energy that was released into the room during this stunt.

“This is what demonic possession looks like,” Harms commented below the clip she shared, encouraging viewers to watch it all the way to the end. “I know a lot of y’all don’t believe in the spiritual realm, but thanks for bearing with me anyway. In my opinion, this is it. On all fours. Growling. At the teen pride event at the public library.”

In addition to handing out chest binders and exposing young and innocent children to this demonic drag queen demon, the teen pride event organizers also handed out flyers about pre-exposure prophylaxis, or PreEP, a pharmaceutical that, when taken daily, is supposed to reduce one’s risk of getting AIDS when having sex with HIV-positive people.

Activists from the so-called “Lifelong Alliance for AIDS” were on-site to push PreEP on young children – the Lifelong Alliance raking in about $22 million annually from “government grants and fees” in order to do so.

Representatives from abortion giant Planned Parenthood were also in attendance at Renton Public Library’s teen pride event, during which they handed out personal lubrication and flavored condoms to children.

Meanwhile, adults who were not accompanying teenagers were reportedly told by library personnel that they had to leave the premises before the teen pride event began. One woman by the name of Lynn Meagher says she was “physically removed” by police after refusing to leave.

“Welcome to 2019, when protecting kids from being prematurely sexualized can get you potentially arrested,” Harms commented about how Meagher was treated. “Maybe she should have claimed to identify as 14,” Harms further joked.

To help support efforts nationwide to stop this LGBTQ indoctrination of society’s most vulnerable, be sure to sign the LifeSiteNews Life Petition to end all “Drag Queen Story Hour” and “teen pride” events at America’s public libraries.

“Believe it or not, there is a well-orchestrated, subversive plan being promoted by the American Library Association, to promote a phenomenon known as ‘Drag Queen Story Hour’ (DQSH) to small-town American libraries, in order to ‘capture the imagination and play of the gender fluidity of childhood and give kids glamorous, positive, and unabashedly queer role models,’” the petition explains.