GNN Note – A victory for the Christian world and French people.

Following the disastrous fire on April 15th, modern architects made plans for the new and updated Notre Dame Catholic Cathedral in Paris, France.

Proposed plans included a giant glass spire to signify secularism or an Islamic minaret to respect the growing Muslim population.

This came after President Emmanuel Macron’s prime minister announced there would be a competition in design to rebuild the infamous cathedral. 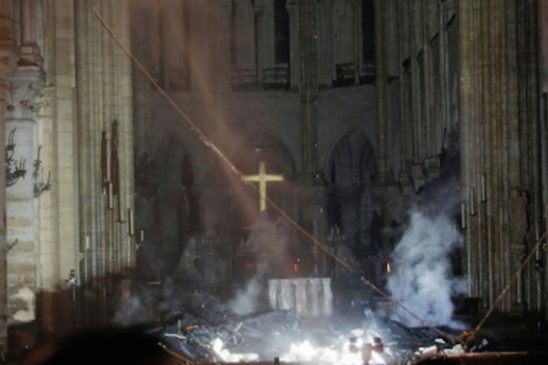 The alter Crucifix lights up during the massive fire in the historic Notre Dame Cathedral.

On Monday the French Senate approved the government’s Notre-Dame restoration bill – but added a clause that it must be restored to the state it was before the blaze.

French Senators have stipulated that Notre-Dame cathedral must be restored exactly how it was before the devastating fire that tore through the Paris landmark.

On Monday evening, the French Senate approved the government’s Notre-Dame restoration bill – but added a clause that it must be restored to the state it was before the blaze, striking a blow to the government which had launched an international architecture competition to debate ideas on the restoration.

The subject of the rebuilding of the cathedral – which was left badly damaged after fire tore through the roof and destroyed the spire on April 15 – has become a fraught battleground between traditionalists who want an exact restoration and others who favour a more imaginative take.

More at The Gateway Pundit>>>