A major fire has engulfed the famed Medieval Notre-Dame cathedral in central Paris, destroying the ancient timber roof, bringing down the central spire, and threatening the bell towers.

The cathedral was in the process of a period of restoration, and in the past couple of days has had sixteen bronze statues removed from the roof area in recent days to facilitate work. The fire appears to have started in the roof where work is taking place.

UPDATE 0120 — Photos from inside the cathedral
Some photos of the cathedral’s interior show it is damaged, but not destroyed. 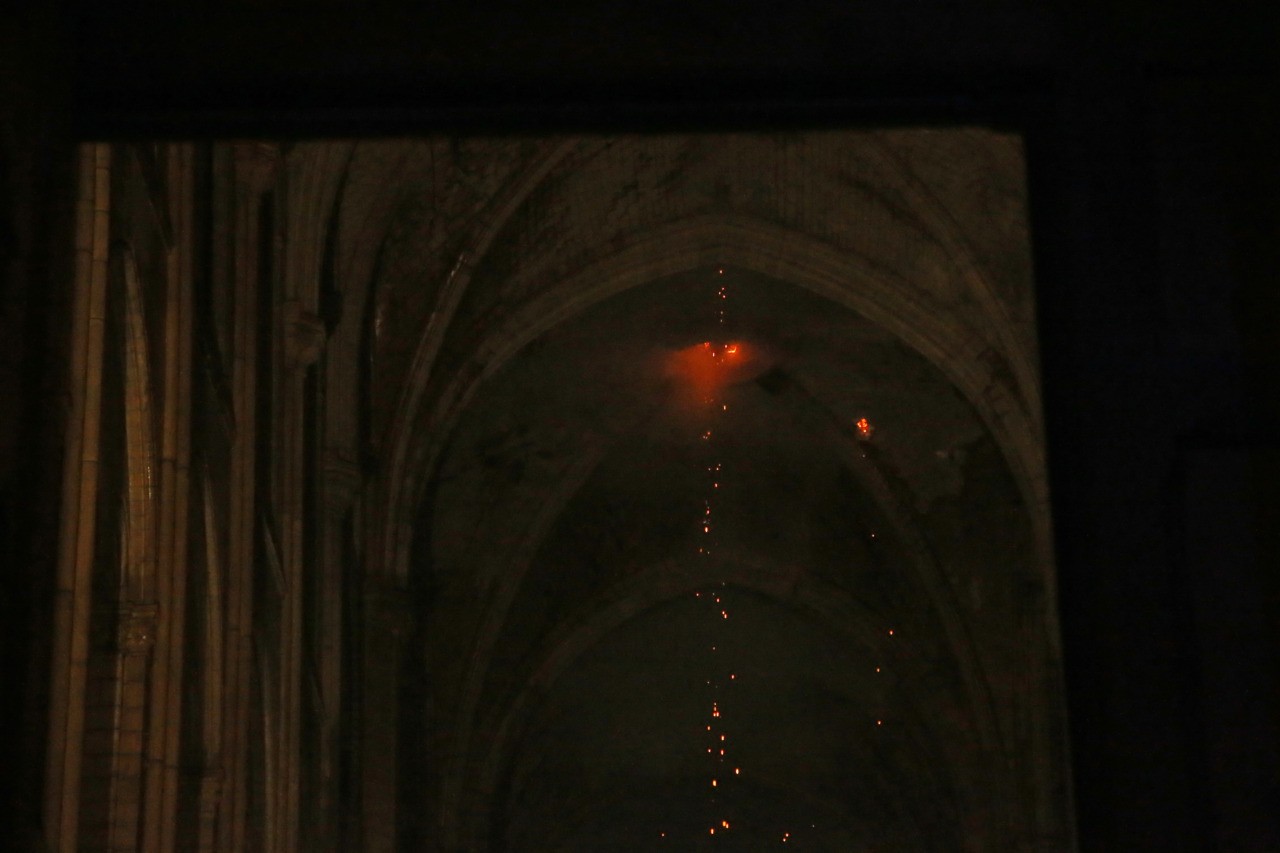 A view from inside Notre Dame cathedral during the fire in Paris, Monday, April 15, 2019. (AP Photo/Michel Euler)

A Reuters diagram shows the areas of the cathedral damaged by the fire: 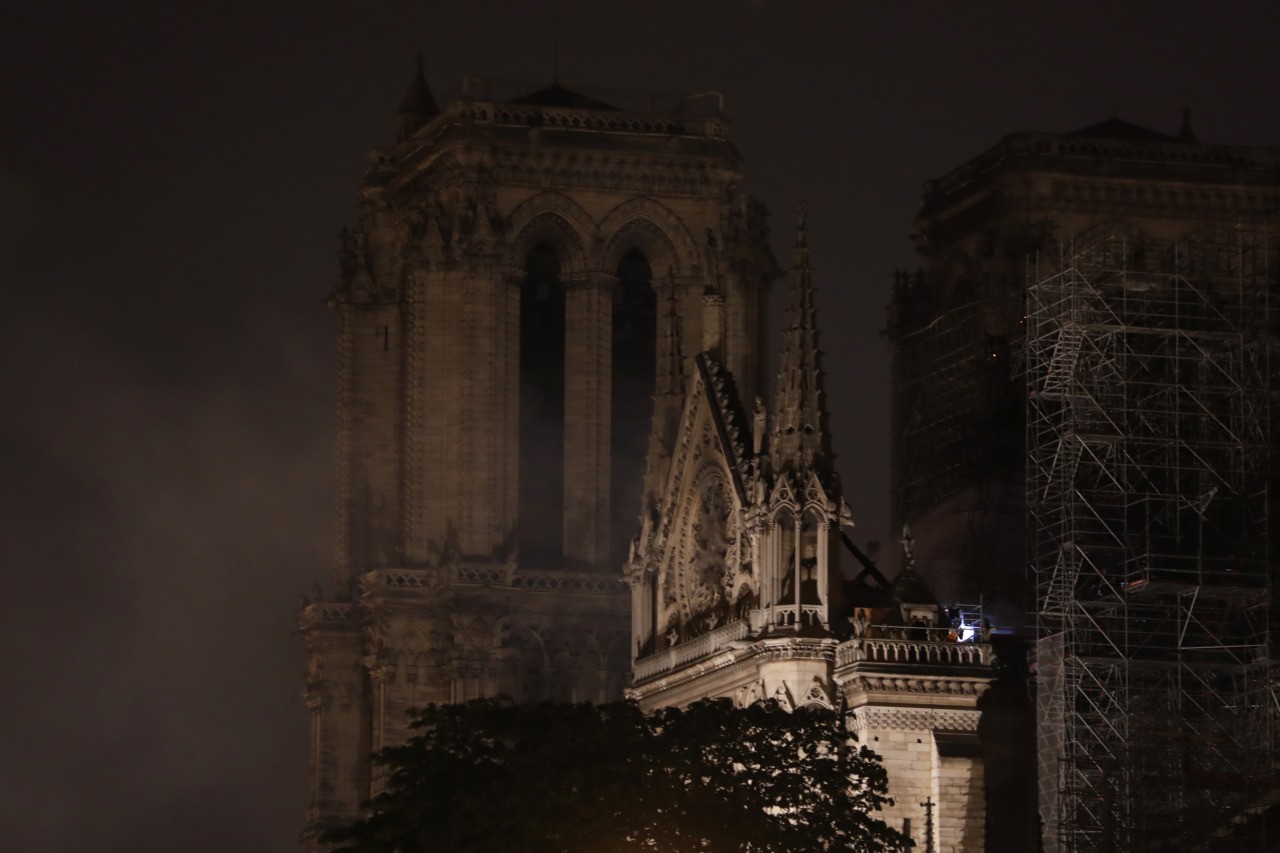 Smoke rises near the towers of Notre-Dame Cathedral in Paris as firefighters work to put out a fire early on April 16, 2019. The main structure of Notre-Dame cathedral has been saved after hours of fire-fighting to put out a devastating blaze, the city’s top fire official said late on April 15. (ZAKARIA ABDELKAFI/AFP/Getty Images)

Breitbart’s Tom Williams reports on the message sent by the Vatican concerning the fire at Notre-Dame:

“With shock and sadness, the Holy See received the news of the terrible fire that devastated the Cathedral of Notre Dame, symbol of Christianity in France and the world,” reads the communiqué, which the Vatican made available to Breitbart News.

“We extend our closeness to French Catholics and to the people of Paris and ensure our prayers for the firefighters and those who are doing all they can to deal with this tragic situation,” the Vatican said.

UPDATE 0050 — Prayers and support from around the world

(AP) — The world reacted with shock, horror and prayers to the massive fire Monday at the Notre Dame Cathedral in Paris, united in grief and in solidarity with the people of France.

As the flames tore through the 12th-century cathedral, Spain’s prime minister offered France the help of his country in the recovery.

The fire is a “catastrophe for France, for Spain and for Europe,” Spanish Prime Minister Pedro Sánchez tweeted, adding that the flames are destroying “850 years of history, architecture, painting and sculpture.”

French President Emmanuel Macron told reporters near the scene that he will seek international help, including the “greatest talents” in the world, to rebuild Notre Dame.

U.S. President Donald Trump, speaking at the start of an appearance in Minnesota, spoke of the “terrible, terrible fire” that devastated “one of the great treasures of the world.”

The Notre Dame Cathedral, situated on an island in the Seine River in the heart of Paris, is one of the world’s most visited tourist destinations, drawing some 13 million people each year. The fire’s emotional impact was widely felt. People from all over described in Facebook posts how they cried when they heard about the fire.

Former U.S. President Barack Obama posted an old photo of himself, his wife and their two daughters lighting candles in the cathedral.

“Notre Dame is one of the world’s great treasures, and we’re thinking of the people of France in your time of grief,” Obama said on Twitter.

The Vatican said Pope Francis “has seen with shock and sadness the news of the terrible fire that has devastated the Cathedral of Notre Dame, symbol of Christianity in France and in the world.”

“God preserve this splendid house of prayer, and protect those battling the blaze,” Dolan said in a statement.

Jeff Ament, bass player for Pearl Jam, remembered spending hours at the cathedral in his first visit, in 1991, with record executive Michael Goldstone.

“Thinking about Paris,” Ament tweeted, with photos of the cathedral.

In Russia, the Russian Orthodox Church’s secretary for inter-Christian relations Hieromonk Stefan called the fire “a tragedy for the entire Christian world and for all who appreciate the cultural significance of this temple,” the state news agency RIA-Novosti reported:

“All means are being used, except for water-bombing aircrafts which, if used, could lead to the collapse of the entire structure of the cathedral,” the agency tweeted.

Notre Dame Spokesman: ‘Nothing Will Remain’ from the Cathedral’s Frame https://t.co/bra2WnEXcj