Myths and misconceptions about the Byzantine Empire (of which Russia is believed by many to be the spiritual and political successor) abound. According to these prejudiced views, it was a backward and underdeveloped state, an Eastern despotism with a dead, ossified culture. On May 29, 2018 (the commemoration of the fall of Constantinople according to the old calendar), Pravoslavie.ru published a talk about these myths related to the Byzantine Empire with Pavel Kuzenkov, Ph.D in History, teacher of the Sretensky Theological Seminary.

—According to a wide-spread myth, the Byzantine Empire was a despotic state.

—First we need to look into the origin of the word “despot”. In ancient Greece a despot (“despotes”) was technically “master of a household”. The same sense could be found later. To be brief, this word originally meant “a master” (“vladyka” in Russian), an owner of something, without any negative connotation. But from about the eighteenth century on “a despot” meant “a tyrant” in European culture. It was a substitution of concepts. Little by little the word “despot” began to grate on Europeans’ ears. For example, the exclamation “Is Polla eti, Despota”, meaning “Many years, Master Bishop!” It sounded as if the Orthodox were obsessed with despotism!

Thus, a despot is merely a master who is responsible for the territory and people in his jurisdiction. People are obedient to the emperor who rules over them. But there are no signs of violence in this subordination. That is why “despotism” was a normal form of government for all Greeks of that era.

—Despotism is often associated with an arbitrary rule, the petty tyranny of one man—a cruel monarch.

—What you have just mentioned was called tyranny and denounced as a perversion of authority. The Greeks viewed the emperor’s authority as lawful governance. There is a law in the Romano-Byzantine legislative tradition that was issued by Emperor Theodosius II (the fifth century) and included into the Justinian Code (the sixth century).

Emperor Justinian I, author of the famous compilation of Roman law named after him. From a mosaic in Ravenna, Italy.

It reads: “If an emperor’s edict contradicts the laws, it shall not be executed.” In other words, an emperor must abide by laws and rule justly. And he is accountable before God for that. Interestingly, the emperor stood above the laws—he was not limited by anybody or anything—but Theodosius II imposed these constraints on himself so that his legislative acts could agree with the laws, proclaiming: “Nothing is more wonderful than when an emperor acts in accordance with laws.”

—Did the empire have a “checks and balances” system?

—Yes, it did, and a very strong one at that! Firstly, the senate that they called the Synclete was always there. Secondly, the masses and the army played an important role at some points. And, thirdly, the Church was always independent and never controlled by the state.

—So the emperor de facto wasn’t the head of the Church?

—Never! It would have been a gross violation of the Church canons that forbid the laity to intervene in the Church affairs, and the emperor was practically a lay-person, albeit with a special status. The Head of the Church is Christ. 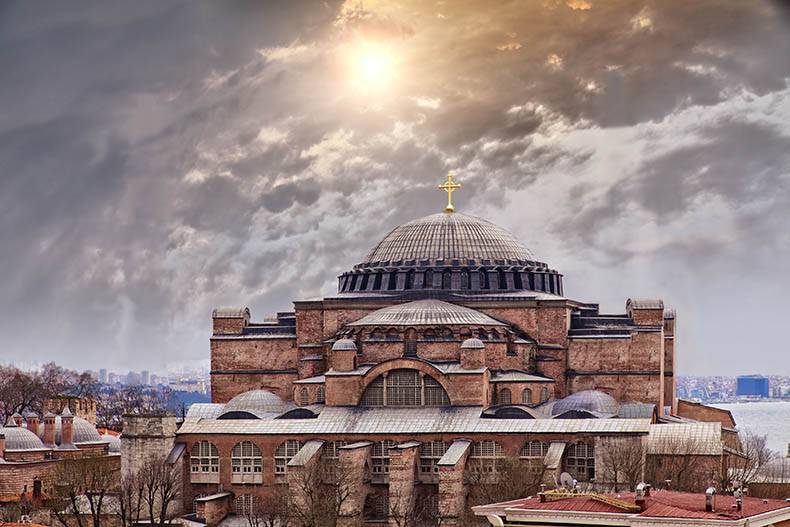 Artist’s rendering of the Hagia Sophia (Holy Wisdom) Church. For centuries after the fall of Constantinople, it was a mosque. In 1935, it was designated as a museum.

—It was according to the Church canons and rules, ideally. But what practice existed there de facto?

—There was a consensus: since the Church was in the world, the emperor acted as a representative of the secular society in it. Specifically, on behalf of all the laity he participated in the election of the patriarch. The Synod would nominate three candidates for the emperor to choose from. The emperor would convene Ecumenical Councils and define the diocesan boundaries, which in most cases corresponded to administrative boundaries. Thus he played an important part in the life of the Church.

But if the Church Hierarchy for one or another reason disagreed with the emperor, he had no right to depose the patriarch or a bishop by his decree. To be more precise, he legally had a right to arrest or exile the patriarch, but this would immediately provoke violent indignation in society and potentially lead to his dethronement or even death.