GNN Note – Want to know why your children are overdosing to the tune of 72,000 last year? If you don’t think these criminal swine knew about all the heroin, fentanyl and other highly addictive opioid derivatives please take the time to read this corporate prospectus, I mean report produced by the United Nations. Click Here Now to learn how our communities, our nation and our world were sold to these murdering, soulless animals. But, it’s all good because the ruling class are becoming extremely wealthy while your children and family members suffer.

Pharmaceutical companies are under the spotlight with congressional hearings on the cost of drug prices and allegations of the industry’s role in the opioid crisis.

Dr. Raeford Brown, a pediatric anesthesia specialist at the UK Kentucky Children’s Hospital and chair of the Food and Drug Administration (FDA) Committee on Analgesics and Anesthetics, has been openly critical of big pharma and the lack of proper oversight from the FDA.

Despite many politicians, particularly declared presidential candidates, beginning to speak out against big pharma, Brown does not think that anything will come out of it “because Congress is owned by pharma.”

“The pharmaceutical industry pours millions of dollars into the legislative branch every single year,” he told Yahoo Finance. “In 2016, they put $100 million into the elections. That’s a ton of money.” 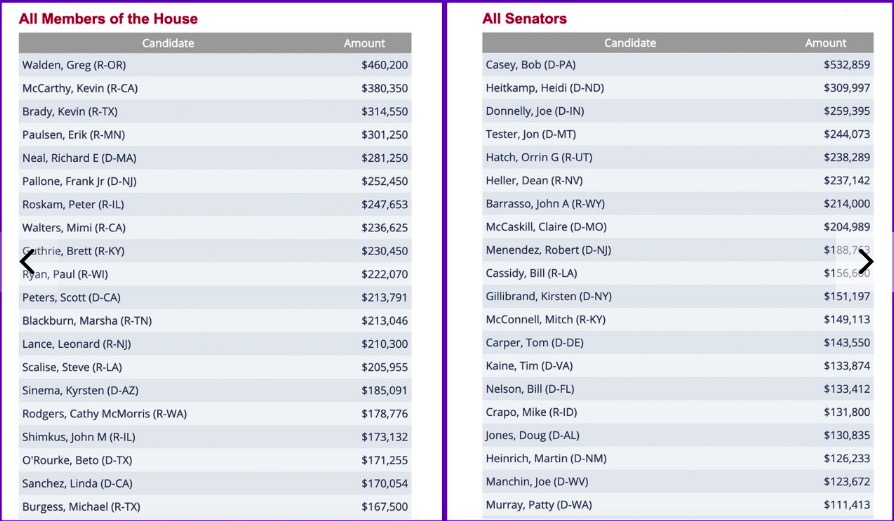 Contributions from the pharmaceutical and health products industry during the 2017-2018 election cycle. (Photo: screenshot/OpenSecrets)

OpenSecrets, a website operated by the nonpartisan Center for Responsive Politics, tracks money in U.S. politics. It ranked the top 20 members of the House and the Senate that have received the most campaign contributions from the pharmaceutical and health products industry during the 2017-2018 election cycle.

The website defines the industry as including “not only drug manufacturers but also dealers of medical products and nutritional and dietary supplements.”

During the ‘17-’18 election cycle, Kevin McCarthy, now the House minority leader after midterms, received the second-highest amount of funds in Congress. The California-based politician received a total of $380,350 in campaign contributions, with a large sum coming from pharma companies such as Abbott Laboratories (ABT), Pfizer (PFE), Johnson & Johnson (JNJ), Eli Lilly (LLY), Amgen (AMGN), and Merck (MRK).