In this new story over at Breitbart that Steve Quayle had linked to on his website Sunday morning, they reported that Pope Francis had just conducted a completely unprecedented and closed-door meeting with the head of the Mormon Church, a meeting that many long believed could never happen.

The first head-to-head discussions ever held by leaders of the two global churches, Francis’s meeting with ‘prophet‘ Russell M. Nelson of the Church of Jesus Christ of the Latter-day Saints came soon after Francis had also met with a top Islamic leader, the grand imam of al-Azhar, to sign a ‘universal peace document‘ though as this story over at Now The End Begins pointed out, the document made no reference to Jesus Christ nor the Bible.

And while true ‘peace‘ would be highly welcome upon our planet and in this country that has been at war for over 90% of our existence, as this story at Now The End Begins pointed out, the rush to a ‘one world religion‘ is nothing more than the finishing touches upon the move towards a ‘one world government‘ and as Steve Quayle mentioned in an SQnote while linking to that Breitbart story, as the “one world religion accelerates, the devil jumps for joy.”

We’ll take a look below at a new SQAlert in which Steve warns we should all repent for what we’ve allowed to happen to this country, where babies being legally murdered by their mothers with the full approval of the state has become the law of the land while very soon, like with the 144,000 witnesses in the Book of Revelation, the ‘end of the age‘ that we’re going through now may soon be undeniable.

And as we’ll see within the rest of this ANP story, between the wars and rumors of wars, global Earth changes, the moves being made by Pope Francis to cement all religions together and the collapse of an iconic 144-year-old fig tree that marked the site where the city of Los Angeles was founded, more and more signs of ‘the end of an age‘ are emerging. First, from Now The End Begins.:

During his reign as both king of Vatican City and as the pope of the Catholic Church, Jorge Mario Bergoglio has been widening his tent and making preparations for the coming One World Religion of Antichrist. From seducing gullible pawns like Rick Warren who gushingly calls him ‘our pope’, all the way up to signing a ‘Universal Peace Document‘ with a high-ranking leader of Islam, Pope Francis is a man on an end times mission.

Now a secret, closed-door meeting with the head ‘prophet’ of the Mormon Church, Russell Nelson, reveals the expansion of another end times partnership as the Vatican adds more pieces to their end times chessboard. The Roman harlot is on the move, and trading in the souls in men.

(If you like stories like this, please consider donating to ANP to help keep independent journalism alive.) 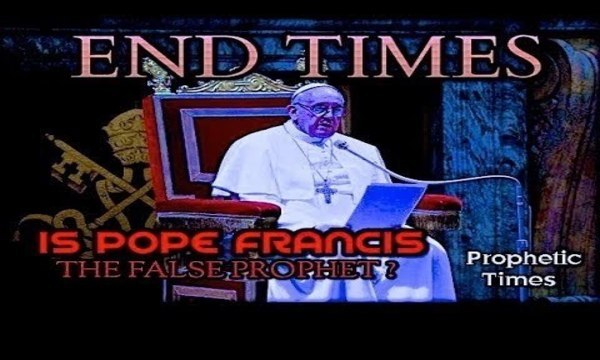 Two days ago on ANP, we published this story within which we reported upon the increasing signs of something perilous ahead and if one were to look at the moves made by Pope Francis alone over the past few weeks, it’s easy to understand why Now The End Beginsbelieves the pieces of the ‘end times chessboard‘ are now coming together seamlessly.

As we hear in the first video at the bottom of this story from videographer ‘Face Like The Sun‘, Pope Francis and the globalists are now following the ‘Tower of Babel‘ narrative, trying to re-create a ‘one world system‘ based upon peace and ‘universal equality‘ but as our videographer points out, ‘universal equality‘ in the race to the bottom that the world is now in leaves us all slaves to the system.

Our videographer also points out that the ‘one world system‘ many have long warned of is ‘tyrannical global socialism‘ and with the left in America pushing for just such a system here now, resulting in what some on the left hope will be ‘global peace‘, our videographer also bluntly warns that the Bible long ago told us: “While people are saying, ‘Peace and security,’ destruction will come upon them suddenly, like labor pains on a pregnant woman, and they will not escape.” Thessalonians 5:3