Note from founder Erin Elizabeth: Full disclosure, I  spoke the last 3 years in a row at Cal Jam. It’s an event at the opera house in Costa Mesa which seats several thousand doctors in the audience.

Unfortunately it appears I missed the most interesting year of all this year.

I’ve reached out to Cal Jam’s founder, who I’ve known for years obviously,  Dr. Billy Demoss, for comment but have not reached them yet. I’ve also reached out to National Vaccine Information Center in Washington DC, also friends for years, and asked them for comment, but not heard back yet. Granted, I’ve only asked them both for comment later tonight on a Sunday night.

I was recently on Jenny McCarthy’s show and will reach out to her assistant for comment as well.

This video has been out since Saturday day without one single story written on it that I can find.

I have seen Dr Brian Hooker (who stars in Vaxxed) asking Cal Jam’s founder and Cal Jam what is going to be done, as his son is mentioned in the video and he’s very upset about this as he describes in the screen shot below.

What do you think?  (I also want to disclose that I do know Dr Heather Wolfson, as I’ve spoken the same year she did previously and been on other stages withher,  and have interviewed her husband (cardiologist) Dr Jack Wolfson. 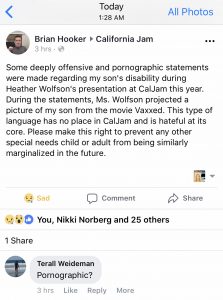 Give it a minute to play…