90,000 Gather to Wage War Against Spiritual Inaction at The Send by TAYLOR BERGLUND for Charisma Mag

If Christians want to pray for awakening and revival, then they need to actually go out into the world and get to work. That was the message of The Send, a charismatic mega-event that continued without ceasing for nearly 12 hours straight on a sweltering Saturday in Orlando, Florida. According to the event’s leaders, 90,000 people registered for and attended the free event, held in the Camping World Stadium.

“We are here because we are crazy enough to believe that we are here for the greatest move of God in human history,” said Youth With a Mission’s Andy Byrd. Though The Send is not led by any one individual or ministry, Byrd has been one of the event’s primary collaborators and acted as de facto emcee, transitioning speakers and artists on and off the stage. 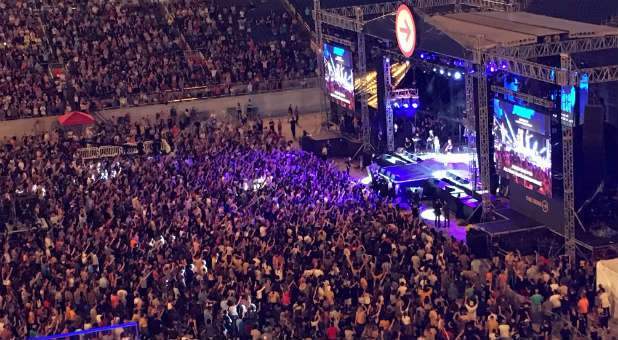 Fixing that disparity was the main goal of The Send, to hear its speakers explain it. Evangelist Kolenda said he’s used to seeing crowds this size in countries like Africa or Asia, quipping that in Africa, “We do our counselor training in a stadium this size.” But he said he regularly fields questions about when a similar evangelistic outpouring would happen in North America. Kolenda said he believes wholeheartedly a new era of evangelism started Saturday in Orlando. He hoped The Send would be responsible for 5,000 people registering for missions training: “the greatest number of people who have ever signed up to go to the nations of the earth with the gospel.”