GNN Note – Kettle calls pot black, pot replies by calling kettle black. In all seriousness according to Open Doors USA these two countries, Turkey and China, are listed 26 and 27, respectively, for Christian oppression. So, the fact they are being accused of oppressing other religious groups is not surprising.

The Turkish Foreign Ministry issued a stern condemnation of China’s policy of using internment camps to torture and “re-educate” Uighur nationals and other Muslims into communist atheist ideology and Han culture on Saturday, triggering an outraged response from Beijing Monday accusing the Turks of human rights violations against Kurdish citizens.

The Chinese Communist Party began building internment camps last year in westernmost Xinjiang province, home to the majority of the nation’s Uighur ethnic minority. Up to two million Uighurs and other Muslim ethnic minorities, such as Kyrgyz and Kazakhs, are believed to have disappeared into these camps. The camps are not prisons – the Chinese regime explicitly does not charge the prisoners therein with crimes – but survivors say they are subject to torture just as body contortion, sleep deprivation, electroshock, and other ill treatment and forced to learn Mandarin and pledge allegiance to Communist Party leader Xi Jinping. Late last year, evidence surfaced that Beijing is using the Xinjiang prisons as slaves and are building factories in the internment camp grounds.

Outside of the camps, reports from as recently as last week revealed that Chinese police were forcing Uighurs throughout Xinjiang to eat pork and drink alcohol, both forbidden by Islam, to diminish their religious devotion. Police reportedly threatened those who did not consume the haram products with imprisonment at a “vocational center.”

Chinese officials insist the camps are “vocational schools” where underprivileged minorities are learning skills that make them more competitive on the job market. This has not explained why so many of those who disappeared are highly educated professionals with stable employment. 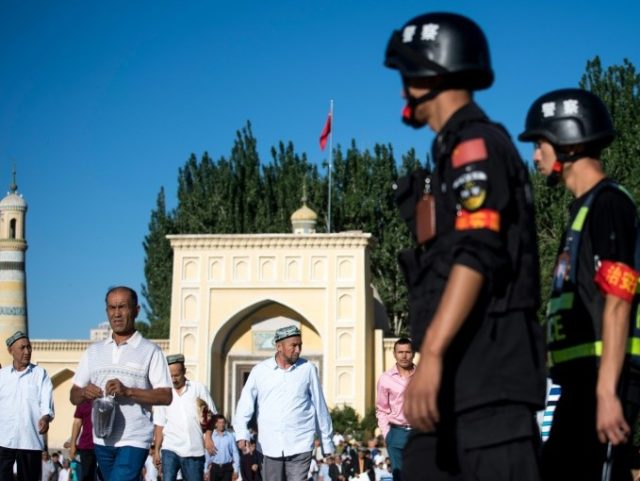 The Turkish government, in a statement signed by spokesperson Hami Aksoy, condemned China in its statement for worsening treatment of fundamental human rights in the region.

“It is no longer a secret that more than one million Uighur Turks incurring arbitrary arrests are subjected to torture and political brainwashing in internment camps and prisons. Uighurs who are not detained in these camps are under heavy pressure,” the statement read. “Our kinsmen and citizens of Uighur origin living abroad cannot get news from their relatives in the region. Thousands of children have been removed from their parents and became orphans.”