Ayatollah Khamenei Tweets: We Want ‘Death to the American Politicians Currently in Power’ By Patrick Goodenough  for CNS News

GNN Note – I wonder if the Pope discussed this type of action before he decided to embrace the one world religion idea and start using words like “common values” when discussing other types of religious dogma? Asking for a friend.

As the regime in Tehran marks the 40th anniversary of the Islamic revolution, supreme leader Ayatollah Ali Khamenei wants Americans to know that “Death to America” doesn’t apply to everyone, just to leaders like President Trump, Secretary of State Mike Pompeo and National Security Advisor John Bolton.

“ ‘Down with USA’ means down with @realDonaldTrump, @AmbJohnBolton and @SecPompeo,” the ailing 79-year-old said in a posting on his official Twitter account, khamenei.ir. 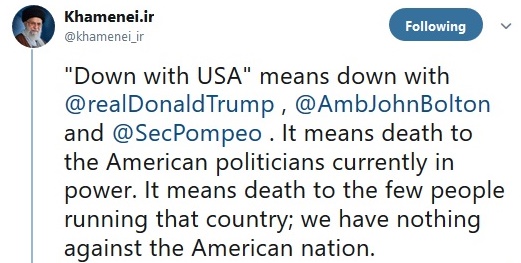 The tweets were excerpts from a speech Khamenei gave to air force officers and personnel late last week, in which he named the three U.S. leaders as the target of the chant, and said “we have no fight to pick with the American people.”

At the same time, he said the slogan would continue to be heard “as long as the U.S. practices savagery and vice.”

(Regime-linked English-language outlets sometimes translate the Farsi chant marg bar Amrika as “down with America.” Some in the West – including apologists for the regime – say although “marg” indeed means “death,” translating the phrase as “death to America” is too literal, and tendentious. Whatever the case, the khamenei.ir tweet itself used the English word “death.”)

February 11 (Bahman 22 in the Persian calendar) marks the anniversary of the 1979 revolution, which saw the Western-backed Shah ousted by fundamentalist supporters of the late Ayatollah Ruhollah Khomeini, Khamenei’s predecessor.