I don’t really find this surprising as the Catholic church protects pedophiles, so why not allow a genocidal maniac remain in their ranks? Andrew Cuomo has assured that New York will remain a bastion for abortions, at any stage of pregnancy, until someone with a heart steps up and makes a change.

Millions of Catholics nationwide who want New York Governor Andrew Cuomo excommunicated from the Catholic Church for signing a bill that legalizes abortions up to birth are going to be sorely disappointed.

Through a spokesman, Cardinal Timothy Dolan said that excommunicating the governor is “not an appropriate response.” He went on to say that excommunication is typically called for by frustrated Catholics who are upset.

As a reported for CNN tweeted: “I asked @CardinalDolan‘s spokesman about the calls for Gov. Cuomo to be excommunicated over NY’s new abortion bill. While emphasizing that this should not be considered a comment on any specific person, he said excommunication “should not be used as a weapon.” 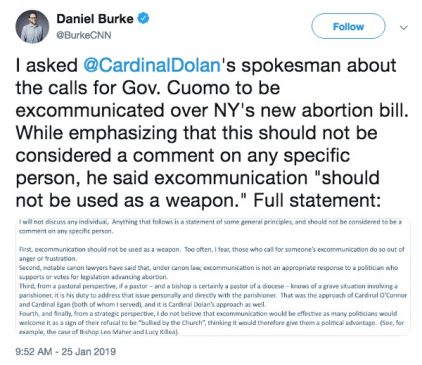 SIGN THE PETITION: Excommunicate Andrew Cuomo for Legalizing Abortions Up to Birth

The Democrat governor claims to be a devout Catholic and even quoted Pope Francis to back up his opposition to the death penalty. But he also is a radical abortion activist who threatened to hold up the state budget until the legislature passed a law legalizing abortion for basically any reason up to birth. Source

At least members of the church have a big enough heart to start a petition to remove this person from the church. I’m not sure if Cuomo could be considered a Christian when he celebrates this type of action, this type of legislation that will end the life of hundreds of thousands, if not millions, of children.